According to SNL data, the NPLs of the five largest banks totaled 423.49 billion Chinese yuan as of June 30, up 21% from 349.91 billion yuan as of June 30, 2013. Nonperforming loans are likely to be an ongoing challenge for Chinese banks given the rising debt levels in the manufacturing and real estate sectors. 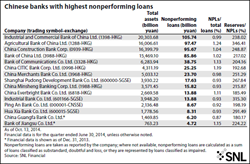 Announced today, SNL Financial has released a review on the NPL ratios of the largest Chinese banks. Nonperforming loans represent an ongoing challenge for major Chinese banks, given a mediocre outlook on the country's economy.

According to data compiled by SNL Financial, all the five largest Chinese banks reported an increase in their NPL ratios as of June 30 when compared to the end of 2013.

In response to the increase in NPL levels, Chinese banks have been taking action to avoid lending to risky borrowers. These include raising lending norms and taking a closer look at potentially problematic loans.