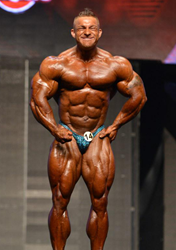 Winning my third title at the 50th Anniversary of Joe Weider's Olympia means the world to me. I am incredibly grateful and blessed to have the opportunity to carry on Joe's legacy, while creating my own, as a 3X Olympia 212 Champion.

Flex explained, “Winning my third title this year at the 50th Anniversary of the Olympia means the world to me. Joe Weider, who passed last year, was the founder of the event and a pioneer in the fitness industry. He originally signed me to a contract with Weider publication’s Muscle & Fitness / FLEX magazine when I was just 22 years old. I am incredibly grateful and blessed to have the opportunity to carry on his legacy, while creating my own, as a 3X Olympia 212 Champion and 212 Arnold Classic winner. I proudly fly the flag as a role model representing Weider/AMI, meeting fans from all over the world spreading Joe’s message of health and fitness.”

Training under the watchful eye of Neil Hill, Flex’s long-time coach and founder of the Y3T training principles, Lewis won his first Olympia title in 2012 beating archrival David Henry. He then repeated history again in 2013, winning back-to-back Olympia titles. In March 2014, Flex again made history by winning the first ever 212 lbs. competition held at the Arnold Schwarzenegger Sports Festival in Columbus, Ohio.

Immediately following the 2014 Olympia Weekend, Flex flew to Seoul, Korea for the first ever IFBB bodybuilding competition hosted in Asia and walked away with another victory at the Korean Grand Prix. After returning home to Florida for two days, Lewis boarded a flight to the Czech Republic where he successfully defended his 212 title at the EVLS Prague Pro for the third consecutive year. Early the following morning, Lewis and his team flew to Italy for the first ever San Marino Pro, his last competition of the year. Despite competing less than twenty-four hours ago in a different country, he brought his signature conditioning to the stage and took the title to win a total of four shows in just three weeks. It was the Welsh Dragon’s eleventh consecutive win in the 212lbs. division.

The Mr. Olympia returns to television for the first time since 1984, when Lee Haney won his first of eight titles. NBC Sports Network will televise a 90-minute specials around the event on October 25th at 5:30 p.m. ET. Check your local listings here.

Click here for photos of Flex at the 2014 Olympia.

About Flextraordinary Productions Inc.
James ‘Flex’ Lewis is an IFBB Professional bodybuilder that was born in the small town of Llanelli, Wales in the United Kingdom. He moved to the states when he was 21 years old to follow his dreams to compete in America. Now located in Boca Raton, FL, Flex launched Flextraordinary Productions Inc. as the parent company promoting athletic training apparel branded under the his own name as well as Dragon Nutraceuticals http://dragonnutra.com which expects to launch its first product in the Fall of 2014. For more information, please visit http://flextraordinary.com