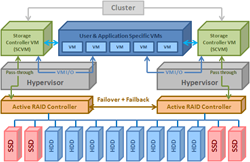 The StoneFly USS solution is radically both simple and advanced compared to traditional datacenter infrastructures. Each volume can be provisioned as iSCSI, Fibre Channel, or NAS (CIFS/SMB and NFS). Its hypervisors allow multiple Virtual Machines (VMs) to run on a single physical host and mediate all I/O operations including read and write requests to centralized NAS and SAN storage arrays which are typically used to provide shared storage for all of the VMs.

StoneFly implements all control logic as a software-based service running on enterprise-class solid-state storage. Virtual storage controller(s) run on each cluster node improving scalability and resilience, while preventing performance bottlenecks since the storage and control logic is now local to the guest VMs.

###
StoneFly, USS, and the StoneFly logo are trademarks or registered trademarks and the property of StoneFly, Inc.
All other company and product names contained herein are property of their respective owners.