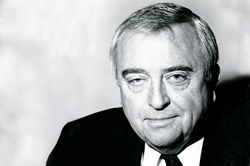 “The work of the Global Ethics Fellows embodies the vision of Robert Myers, who believed that effective ethical inquiry should be rooted in local experiences and communities.

Carnegie Council for Ethics in International Affairs is delighted to announce that the Myers Family has made a generous contribution to establish the Robert J. Myers Fellows Fund in memory of Robert Myers, president of Carnegie Council from 1980-1995. The Fund will be used to sponsor and promote selected activities of the Council’s Global Ethics Fellows, a select group of non-resident leading scholars in Asia, Africa, Europe and the Americas, who are chosen for their expertise in ethics.

The Fellows are at the heart of the Council’s Global Ethics Network, which provides a platform for educational institutions and individuals around the world to create and share interactive resources that explore the ethical dimensions of international affairs. Fellows spearhead their universities' involvement in the Network, organize events at their home institutions, and collaborate with other Fellows, students, and Council staff to develop joint research, publications, and multimedia projects.

“The Council is very grateful to the Myers Family,” said Carnegie Council President Joel H. Rosenthal. “The work of the Global Ethics Fellows embodies the vision of Robert Myers, who believed that effective ethical inquiry should be rooted in local experiences and communities. This Fund will enable the Fellows to make a significant impact, both locally—and via the Network—globally.”

Robert J. Myers (1924-2011) was a senior-level intelligence officer turned journalist, academic, publisher, and author. In 1944, he was recruited into the Office of Strategic Services—a precursor to the CIA, which he joined in 1949. For the next ten years he served the agency in Japan, Taiwan, Korea, and Indonesia. Soon after leaving the CIA, he co-founded the "Washingtonian" magazine and was publisher of "The New Republic."

He became president of the Council in 1980 and over the next 15 years, left a strong stamp on the organization. Among his many achievements was the launch of the Council’s acclaimed journal, Ethics & International Affairs, now in its 27th year.

Founded by Andrew Carnegie in 1914 and based in New York City, Carnegie Council for Ethics in International Affairs is an educational, nonprofit, nonpartisan organization that produces lectures, publications, and multimedia materials on the ethical challenges of living in a globalized world. For more information go to http://www.carnegiecouncil.org