The Network of Executive Women presented the William J. Grize Award to Mike Gorshe of Accenture and honored Nicole Rasmussen of Deloitte as Regional Leader of the Year and NEW Northwest Arkansas as Region of the Year. 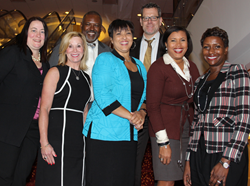 Mike Gorshe of Accenture received the William J. Grize Award for outstanding commitment to NEW's mission. 'He suits up and shows up.'

More than 1,100 retail and consumer goods leaders explored the theme "Innovation You" at the Network of Executive Women's NEW Leadership Summit 2014, Oct. 22-24 at the Hyatt Regency in Atlanta. Attendees at the women's leadership event listened to two keynotes, attended workshops and learning sessions, heard roundtable discussions by c-suite leaders and male executives, and honored industry leaders and regional volunteers.

Mike Gorshe, managing director, CG&S and food retail at Accenture, received the Network's William J. Grize Hall of Fame Award for Outstanding Leadership in support of the Network mission at NEW's Celebrating Excellence Awards Gala, Oct. 23. NEW Secretary Regenia Stein of Ingenuity Consulting, last year’s Grize Award recipient, presented the award, along with NEW President and CEO Joan Toth. The award is named after the late Ahold USA CEO, an early advocate of industry diversity. It honors industry leaders who have demonstrated "an enduring commitment to the advancement of women and to creating a diverse and inclusive workplace.”

"Mike has this extraordinary talent with people,” Stein said. "He is at ease in any situation — even when he’s the only man in a room filled with 30 strong-willed women. He suits up and shows up. He doesn’t always talk, but when he does people always listen."

The Network also honored its regional volunteers, including Regional Leader of the Year Nicole Rasmussen of Deloitte, and named NEW Northwest Arkansas its Region of the Year.

Members of the NEW Northwest Arkansas leadership team accepted the 2014 Region of the Year Award. "This region excels on every level -- including community and college outreach, mentoring, membership and sponsorship,” Thompson said. "The officers and 50 volunteers of this regional group have a passion for change and innovation. They have built a high profile for NEW in one of our industry’s most important business centers.”