BestForeignExchange.com Offers Most Competitive Exchange Rates for Aussie Dollars Due to Recent Depreciation

It was reported that the British pound to Australian dollar rate recorded a volatile fluctuation from 1.82 to 1.84 during the week ended 10th October 2014. However, as the Australian Dollar further depreciated against British pound BestForeignExchange.com geared to offer most competitive exchange rates during the summer in southern hemisphere. 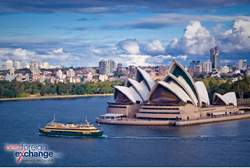 Ideal weather in Australia is a major reason for British travellers to travel far this winter. However, the series of major sporting events during the coming months will attract many sports tourists.

After volatile fluctuations during the week ending 10.10.2014, The Australian Dollar slipped against British Pound on Monday October 13th. The forecasts suggest that Pound will be stronger during the coming weeks, as reported by Exchangerates.org.uk on 13th October 2014.

British travellers’ gaining appetite to travel to Australia as summer is approaching in the Southern hemisphere, BestForeignExchange.com forecasts a strong demand for Australian Dollar and is offering the most competitive rates in London.

“Ideal weather in Australia is a major reason for British travellers to travel far this winter. However, the series of major sporting events such as 4 Nations Rugby, Australian Open, and ICC World Cup during the coming months will attract many sports tourists from the UK,” stated Trevor Samuel, Senior Manager at BestForeignExchange.com

BestForeignExchange.com advises travellers to buy their Aussie Dollars in advance to enjoy the favourable market conditions and also to avoid airports and high fee charging cards for their travel money deals.

“Apart from many activities on the mainland, Australian based cruise lines where Australian Dollar is the on-board currency is another way of enjoying the benefit of strengthening Pound,” concluded Samuel.

BestForeignExchange.com also offers very attractive rates for New Zealand Dollars, Singapore Dollars, Malaysian Ringgits, and Fijian Dollars. All major currencies can be purchased at any of the branches of Thomas Exchange Global ltd or next day delivery service via Royal mail.

Owned and operated by Thomas Exchange Global, BestForeignExchange.com offers the most competitive exchange rates in London and customers that reserve currencies online will be assured the same exchange rate until close of business on the particular day despite any adverse fluctuations. They stock the widest range of foreign currencies in London with over 120 types of foreign bank notes. All foreign currency buy/sell transactions are free of any commission or charges.

Thomas Exchange Global also offers International Money Transfer Service where funds can be remitted to overseas bank accounts within one to two days. With commission free service for transfers over £10,000 backed by competitive exchange rates, customers are assured of a better deal and a substantial saving compared to banks and money brokers. Thomas Exchange Global branches are located at Strand, Victoria Street, Liverpool Street, Hammersmith, Cannon Street and Wormwood Street.