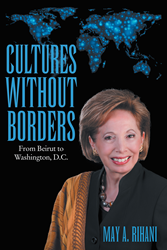 I felt the need to write about the transformative power of girls’ education and why it is truly the cornerstone of women’s empowerment in a modern economy.

According to the United Nations Educational, Scientific and Cultural Organization (UNESCO), over 70 million girls of primary or secondary school age were not enrolled in 2009. May Rihani, an international expert in gender equity and women’s empowerment, wants to bring the issue of girls’ education to the forefront in all the countries of the Middle East, Africa, and Southwest Asia.

Rihani served as the co-chair of the United Nations Girls’ Education Initiative (UNGEI) between 2008 and 2010. Currently, she serves on a number of boards including Mothers2mothers in South Africa, the King Abdullah Education Initiative in Saudi Arabia, and Girl Rising, a global campaign for girls’ education based in the US.

Rihani’s new book, “Cultures Without Borders”, is the memoir of a Lebanese woman whose life defies Western stereotypes about Arab women. Rihani, who has traveled to 71 countries and has worked in more than 40, discovers that the common ground among cultures eclipses the differences.

“I felt the need to write about the transformative power of girls’ education and why it is truly the cornerstone of women’s empowerment in a modern economy,” said Rihani. “I draw upon examples from Afghanistan, Pakistan, Yemen, Congo and many other countries.”

“Cultures Without Borders” is a timely book focusing on issues continually highlighted in mainstream media, from the recent Nobel Peace Prize recipients to events in Nigeria, the Middle East and beyond.

About the author
May Rihani is a Lebanese-American woman who grew up in Lebanon during its golden years from the 1950s through 1975. She is the former Co-Chair of the United Nations Girls’ Education Initiative (UNGEI) and a board member of several international organizations. She has designed and managed dozens of cross-cutting girls’ education and gender equity programs in Africa, Asia, and the Middle East. She has written several books about girls’ education and women’s empowerment. Her expertise is sought by donors including, USAID, UNICEF, and the GE, ExxonMobil, Kenora, and MasterCard foundations.