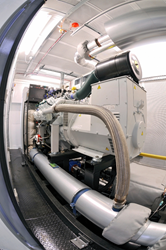 Smart networks of combined heat and power (CHP) units could provide a solution to the UK's possible winter power capacity constraints, according to cogeneration specialist ENER-G.

In response, the electricity system operator is planning to re-activate three existing power stations and reduce network demand via the new Demand Side Balancing Reserve (DSBR), which incentivises businesses to reduce energy usage or switch to their own generation during periods of peak network demand. This is intended to increase the de-rated average cold spell margin to 6.1%.

"As a popular source of on-site generation, CHP is already playing an important role in reducing network demand, but it could play an even greater role in keeping the lights on", said Chris Marsland, Technical Director for ENER-G Combined Power Ltd.

He continued: "Rather than taking the backward, and potentially, costly step of bringing old fossil fuel power stations out of 'mothballs', clusters of existing CHP assets could be configured to communicate via a decentralised smart-grid. This could plug potential capacity gaps with the added benefit of decarbonising electricity supplies since CHP is more than twice as efficient as conventional power generation."

The research consortium has undertaken extensive simulation and modelling, using real data from ENER-G CHP systems and UK Power Networks' London electricity network. This has demonstrated the scale of the opportunity to use complex software and a central control system to tap into existing distributed generation capacity. By linking demand and supply in this way peaks in electrical demand can be relieved.

Chris Marsland added: "Our customers are increasingly concerned about power resilience and many more are opting to configure their CHP systems in island mode to gain full independence from the grid. The other key challenges are to save money on energy and reduce carbon emissions. Active Virtual Power Plants - linking highly energy efficient CHP units via a decentralised smart-grid - can provide the low carbon, cost effective answer to these challenges. They can also plug future capacity gaps resulting from increased renewable energy from intermittent sources such as wind and solar. In this way, CHP can help create a secure and stable network."