Unique "dream cars" roll into the world's racing capital in May 2015. 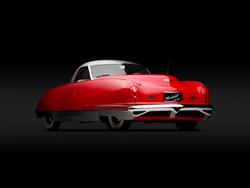 As ‘racing capital of the world,' Indianapolis is a natural fit for this exhibition.

A new type of motor spectacle is coming to Indianapolis next spring. Dream Cars: Innovative Design, Visionary Ideas, a major exhibition featuring rare concept cars from the early 1930s to the 21st century, will open May 3, 2015 at the Indianapolis Museum of Art.

Dream Cars showcases some of the most unique vehicles ever created by top names in the automotive field, including General Motors, Cadillac and Chrysler. Along with conceptual drawings and scale models, the exhibition explores the evolution of revolutionary automobile design that pushed the limits of the imagination and shaped the future of the industry.

“As ‘racing capital of the world,' Indianapolis is a natural fit for this exhibition,” said Dr. Charles L. Venable, The Melvin & Bren Simon Director and CEO at the Indianapolis Museum of Art. “The IMA is recognized as a leading museum in the field of industrial design and we are thrilled to pay tribute to Indianapolis‘ rich automotive history by bringing these legendary vehicles to the city at exactly the time when all auto eyes are on us.”

General Motors coined the term “dream car” in 1953 as a reference to concept cars— experimental vehicles that challenged the status quo with their radical designs. As testing grounds for innovation, concept cars are a platform for automakers and independent designers to experiment with technology and explore cutting-edge styling and design aesthetics. Most concept cars are never intended for mass production, but instead are unique glimpses into the future possibilities of automotive design.

“This is an exhibition unlike any other in the history of the IMA," Venable said. “Dream Cars challenges the idea of ‘art‘ by encouraging visitors to look at exceptional automobiles as rolling sculpture that evoke the possibilities for experimentation, innovation and beauty. These revolutionary designers were, like many great artists, pushing traditional limits and forging new visions of the future.”

The exhibition will feature a Car Design Studio where visitors can explore the process of automobile design through engaging, hands-on activities. An iPad app will also accompany the exhibit and include information about the cars’ hidden features and interiors, historic footage and interviews with leading automobile designers.

Dream Cars will be on display in the IMA‘s Allen Whitehill Clowes Special Exhibition Gallery through Aug. 23, 2015.

This exhibition is supported by the Eli Lilly and Company Foundation. Interpretation materials and content were created with the support of an award from the National Endowment for the Arts.

About the Indianapolis Museum of Art
Founded in 1883, the Indianapolis Museum of Art serves the creative interests of its communities by fostering exploration of arts, design and the natural environment. Encompassing 152 acres of gardens and grounds, the IMA is among the 10 oldest and 10 largest encyclopedic art museums in the United States and features significant collections of African, American, Asian, European, contemporary art and design arts that spans 5,000 years of history. Additionally, art, design, and nature are featured at The Virginia B. Fairbanks Art & Nature Park: 100 Acres, Oldfields–Lilly House and Gardens, a historic Country Place Era estate and National Historic Landmark on the IMA grounds and the Miller House and Garden in Columbus, Indiana, one of the country’s most highly regarded examples of mid-century Modernist residences. For more information visit http://www.imamuseum.org.