The Cal Poly-sponsored event featured six startups pitching their ideas to a panel of industry experts and investors. 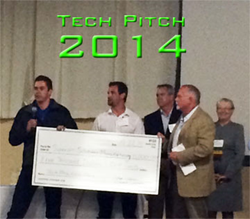 Representatives from the online digital color printing company Docucopies attended the 4th Annual Tech Pitch competition in San Luis Obispo this month. The competition pits six startup companies against one another, competing both for prestige and for a $5,000 cash prize as seed money to bring their visions to fruition.

Much like ABC's "Shark Tank," representatives from each company pitched their ideas to a panel of industry experts and investors.

But the company which most interested Docucopies.com's President and CEO, David Pressley, was not competing at all. Instead, this group of Cal Poly students demonstrated and promoted their suite of apps, known collectively as Monster Create, to their captive audience.

Their apps are aimed at unlocking the creative potential of the new generation of children, many of whom are already glued to their iPads and mobile devices, by allowing them to express their creativity through music, visual art and more. Their website states their vision:

"In an increasingly technological world, it's important that kids are aware of the computer as a powerful tool for the creation of content, and not just as a platform for consumption ... When kids build and imagine, the parts of their brains that schools rarely exercise are given the chance to grow and develop."

They have a 4.5-star rating in the Apple App Store, and future additions to this kid-oriented creative suite are on the horizon. Unfortunately they are not currently seeking outside investors.

For more information on Docucopies.com and their color printing services, including color copies, brochures, books, booklets, and now wide-format printing, visit them online at http://www.Docucopies.com.