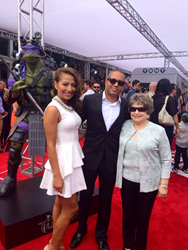 Smith, along with his partners, will produce the life story of stray-to-star Skidboot, a Texas rodeo dog who many call ‘The Smartest Dog In The World’. Taken in by rodeo cowboy, David Hartwig, Skidboot had a heralded 10 + year performance career, was named one of Texas’ Most Famous Dogs and, via sensational viral internet videos, appeared on numerous talk shows including Oprah! The canine reportedly received more fan mail than most of Oprah’s celebrity guests. The ‘Skidboot’ story will center on the redemptive life influence Skidboot had on Hartwig, leading the ex-rodeo star to a second-career, many performance adventures and an enlightened life.

The Skidboot story is set in the ranch country of Smith’s home state of Texas. “This is a bit of a passion project for me since I’m from Texas where there are many ranches and, along with them, ranch dogs. I have always loved the fact that dogs have had a big part in the lives and consciousness of Americans and the Skidboot redemption story is a perfect way to recognize the canines in our lives,” says Smith.

Smith’s partners on the film also herald from Texas and are an amalgam of dog loving producers from all walks of life: a lawyer, a real estate developer and a U.S. Army Special Operations veteran turned entrepreneur. “My partners and I all agree that ‘Skidboot’ is the kind of movie Disney used to make. The story pulls at your heart strings and involves characters at the top of their game,” comments Smith. “Marley and Me set the bar as it was number one at the box office and grossed approximately Two Hundred and forty-two million dollars worldwide. In addition, there are an estimated seventy to eighty million dog owners in the United States alone, which translates that roughly one in every three households own a dog. These numbers are growing and simply can’t be dismissed,” he finishes.

Smith and his team have begun prospecting talent for the film. A suitable canine to play the brilliant Skidboot, a Blue Heeler mix, posed a challenge for the group until Smith discovered what he calls his ‘Secret Weapon’. “We have access to one of the most highly trained dogs on record with quite a fan base at our disposal for the film. Quite often, focus is put solely on the dog to carry a film, but the heart of the Skidboot story is not about the dog or his tricks,” continues Smith. “The story is about the relationships humans share with their pets and the therapeutic bonds that are formed from those connections. Viral videos are evidence that Skidboot’s fans are still out there as he was a dog who touched the world with a redemptive story that continues to affect people long after his passing.”

About Smith: Smith is known for spiriting the Ninja Turtles reboot with Turtles’ co-creator Peter Laird and breathing air into the TMNT live-action feature film franchise at a time when major Hollywood studios were not interested in the property.

Smith’s early strokes, optimism and involvement of his private equity partners at Lightbox Productions, enabled him to leverage the TMNT film option into what was to become the Paramount, Nickelodeon Films and Platinum Dunes movie, Teenage Mutant Ninja Turtles, starring Megan Fox, that opened August 2014 to a $93 Million weekend and #1 blockbuster status. With a TMNT sequel announced for June 2016, the TMNT franchise has secured its position as one of the most lucrative comic book properties in the entertainment and merchandise sectors.