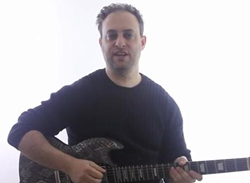 Jazz is the most theoretical of all the styles

“Jazz is the most theoretical of all the styles”, says Johnson, “so it’s good to get into the theory because it’s all easy stuff once you understand it.” Claude teaches this easy guitar lesson in the key of C because there are no sharps or flats and he is basing everything off of the major scale. Johnson demonstrates this concept by building chords based off of the degrees of the major scale with the example of playing the 1st, 2nd and 3rd degrees which creates a major triad. Claude continues by taking this concept a step further by constructing chords with four notes and making them into the jazz family of chords. Guitar TAB’s are available for this easy theory guitar lesson at GuitarControl.com.