"Civilizer of the West" was instrumental in opening Southwest to the world. 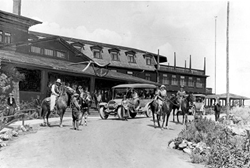 Guests have been staying at the Grand Canyon's El Tovar for more than a century.

The Grand Canyon is celebrating the 100th anniversary this year of two structures built by the Fred Harvey Company, precursor of the park’s long-time concessioner, Xanterra Parks & Resorts. The two buildings, Hermits Rest and Lookout Studio, were designed by Fred Harvey Company architect Mary Elizabeth Jane Colter, whose inventive buildings are known throughout the Southwest.

As visitors to Grand Canyon National Park visit these and other classic structures like El Tovar and the Hopi House or stop to watch the mules head down the Bright Angel Trail, many would be surprised to know that managing hotels, activities, restaurants and retail operations on the South Rim of the Grand Canyon has been handled by one company for more than 100 years.

To understand just how intertwined this original park concessioner and the Grand Canyon are, it is necessary to look back to the late 1800s when train travel was hardly a luxurious endeavor in the Southwest. A common trick employed by unscrupulous restaurateurs in cahoots with railroad employees was to collect money for meals in advance. When the train would stop, passengers would head into the restaurants. Before they had an opportunity to eat their meal, however, the train crew was shouting “all aboard” and passengers had to rush out without their meal or be left behind. In this way the same food provided many meals and the train crew got a cut of ten cents per passenger.

Fred Harvey had left his native London at the age of 15 to seek his fortune in America. At the time, the country’s railroads would take you West, but you couldn’t get a square meal or decent lodging west of St. Louis. Fred Harvey was a western railroad man who knew what travelers into the West had to put up with. His fastidious English tastes revolted at the unpalatable dry biscuits, the greasy ham-leather and the weak old coffee. The dirty, fly-ridden quarters and the all-too-prevalent custom of fleecing travelers “who wouldn’t be back anyway” made Harvey angry enough to change things. He was determined to bring good food, civilized service and attractive, honestly run eating houses and hotels to travelers in the West.

Working with the Santa Fe Railway Fred Harvey opened his first railway restaurant in 1876 in Topeka, Kan., on the second floor of the little red Santa Fe depot. From that modest beginning, the Harvey organization grew into a far-flung resort, restaurant, hotel and retail organization, with operations extending from Cleveland to the West Coast. Good food, good cooking, spotless dining rooms and courteous service introduced by Fred Harvey in his first Harvey House brought a booming business that pleased Santa Fe passengers and amazed Topeka residents.

Later in the same year, when Harvey opened his first hotel at Florence, Kan., on the Santa Fe, the joint venture was welcomed with wild acclaim. The chef, hired from Chicago’s Palmer House, received the fabulous salary of $5,000 a year. Linens were imported from Belfast, Ireland; silver from Sheffield, England; china from France. The furniture was hand-carved antiques. Society balls were held at the hotel; the menus were a gourmet’s delight.

During the 1880s and 1890s, Harvey Houses opened every 100 miles along the Santa Fe through Kansas, Colorado, Texas, Oklahoma, New Mexico, Arizona and California. Rivaling the good food and modern accoutrements that Fred Harvey brought to the West were his “Harvey Girls.” The girls were recruited from good homes in the East and had a major part in taming the West.

Young, pretty and well-turned out in their crisp white aprons and bows over well-fitted black shirtwaists, the girls were a sight to the eyes of lonesome western males. They were housed in dormitories presided over by sensible mature housemothers. They were looked after as carefully as boarding school students in “female seminaries” in the East.

Before long, the cowboys were seen accompanying the Harvey Girls to church on Sundays. When that happened, everyone took it for granted that marriage was the next step and that the roaming, devil-may-care Westerner was about to become respectable. Of Fred Harvey, Will Rogers once said: “He kept the West in food and wives.” The press dubbed him “Civilizer of the West,” and one article from the 1880s said he “made the desert blossom with beefsteak and pretty girls.”

In contrast to the scams perpetrated on the traveling public years earlier, Harvey Houses followed a foolproof system to assure the comfort and satisfaction of travelers. Trainmen canvassed the passengers, noting the number who wished dining room and lunch counter service and telegraphed this information ahead. A mile out of town, the engineer blew a signal announcing the approach of the train. By the time the train arrived, the white coated porters banging on a big brass gong had started the first course to each place, and the entrees were sizzling in the kitchen.

The waitresses, taking orders for coffee, tea or milk, arranged cups according to a code and the “drink girl” immediately followed serving accordingly. Then came the grand entrance of the manager himself, bearing aloft great platters of steak, chops or seafood that he served with a flourish. Passengers were assured ample notice would be given before the trains departed and were encouraged to take their time and enjoy their meals. Plenty of coffee was served. Desserts came in time, and five minutes before train time a signal was given for those lingering over a last bite. Then came the “all aboard.” Time allotted for meals was 30 minutes.

Fred Harvey died in 1901 but his sons operated the business until the 1930s. In January of 1905 the Hopi House, designed by a young architect named Mary Elizabeth Jane Colter, opened and was followed two weeks later by the dedication of the El Tovar hotel. With 95 rooms, electricity and a wide variety of other features, El Tovar was considered the most luxurious hotel between St. Louis and San Francisco at the time. El Tovar was designed by architect Charles Whittlesey and built at a cost of $250,000.

The same year that Fred Harvey died also saw the Santa Fe open a railroad spur from Williams, Ariz. to the South Rim. This transportation option turned a 20-hour bumpy hot stagecoach ride into a three-hour endeavor that opened the Grand Canyon to world travelers. The Santa Fe operated this service until 1968. In 1984 an enterprising couple named Max and Thelma Biegert bought the right-of-way and began operating Grand Canyon Railway (GCR) with daily roundtrip service between Williams and Grand Canyon Village. In 2007 Xanterra purchased GCR from the Biegerts.

Today, visitors to Grand Canyon Village can stay not just in El Tovar, but can choose from other lodges either on the rim or within easy walking distance. Xanterra South Rim, L.L.C.* manages these hotel properties as well as restaurants, retail shops and other concessions such as mule rides and motorcoach tours. Guests may also stay at Phantom Ranch on the floor of the Grand Canyon. Many South Rim structures have become recognized for their historic and architectural significance and are designated as National Historic Landmarks.

Xanterra continues to operate as well as The Grand Hotel in Tusayan, Ariz. outside the park.