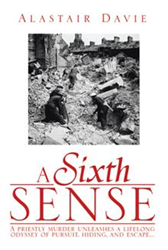 There is a bit of Francis Reagan in all of us. Some like him are haunted by the legacy of their parents or their own past. The question is what drives someone to murder? Is it animal survival or something else?

A run-in with a pedophile priest ends up forcing young Irishman to go on the run when the ‘holy man’ is found murdered. He leaves the grinding poverty of the Dublin slums, and struggles to survive as the 1930s roll by. Author Alastair Davie’s protagonist, Francis Reagan, must rely on “A Sixth Sense” (published by Xlibris) to keep himself alive as his sojourn takes him to the forefront of the Second World War.

Francis Reagan’s flight from the Dublin tenements only lands him in greater danger, first as an ambulance driver in the Spanish Civil War, then as a Nazi collaborator in WW2, and finally a fugitive wanted by both the Gestapo and MI6. His natural intelligence helps him, but a series of missteps ensnare him and his past eventually closes in on him. “A Sixth Sense” is a saga about the consequences of a man’s past sins catching up with him years later despite his efforts over the years to ingeniously camouflage his identity. Wherever he goes, he cannot find peace as his past continuously haunts him and further crimes entrap him. He trusts only his instincts. His sixth sense enables him to keep one step ahead of his pursuers, or does he?

“There is a bit of Francis Reagan in all of us. Some like him are haunted by the legacy of their parents or their own past. The question is what drives someone to murder? Is it animal survival or something else?” noted Davie. By putting those questions in the context of an enthralling novel set in the whirlwind of turmoil that hit Europe in the late 1930s and 1940s, maybe readers will begin to understand the motivation behind his actions

About the Author
Alastair B. Davie is a retired corporate publicist living in Northbrook, a suburb of Chicago, Illinois. He was born in England in1945, and lived in Windsor. He was educated at Langley School, Norfolk, and at the Institute of Marketing's College of Marketing. He was commissioned in the Royal Marines Reserve. He worked for the Financial Times and Reuters before moving to the United States in 1976. He provided public relations, marketing communications and investor relations services for clients of leading public relations agencies and corporations. He retired in 2002 as director of corporate communications for Foster Wheeler Corporation.