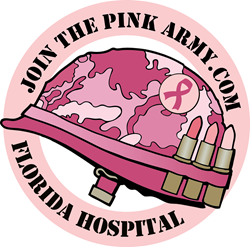 Florida Hospital continues to be one of the Lightning’s top-tier community partners and is renowned both locally and nationally for their exceptional medical services.

Florida Hospital is officially turning the Amalie Arena “pink” during the Tampa Bay Lightning home game on November 1st to raise awareness about Breast Cancer. The puck drops at 7:00pm as the Bolts “face-off” against the Capitals. During the evening, Florida Hospital will enlist Lightning fans in the “Pink Army” and officially declare war on breast cancer. The evening represents the culmination of a month long series of breast cancer events held from coast to coast in Florida. Breast Cancer is the second leading cause of cancer deaths among women, exceeded only by lung cancer according to the American Cancer Society.

“While one in eight women will be diagnosed with breast cancer in their lifetime, the survival rates are encouraging and continue to increase. Florida Hospital is leading the way by offering the very latest in screening tools such as 2D and 3D Mammography and life-saving treatments. We all know that early detection is key, and we encourage both men and women attending tonight’s game to enlist in the “Pink Army,” a statewide effort to increase community awareness about breast cancer,” said Dr. Melissa Themar-Geck, Medical Director of Florida Hospital Tampa Breast Care Center.

The Florida Hospital Pink Army began in 2010 to increase community awareness about early detection and prevention of breast cancer. Today, there are over 50,000 soldiers across the state of Florida. The purpose is simple: enlist, get screened and donate. During the game on Breast Cancer Awareness night, coaches and broadcasters will wear pink ties to show their support, while Dr. Michaela Klein, a General Surgeon who practices at Florida Hospital Wesley Chapel and Florida Hospital Zephryhills will be interviewed live on Sun Sports pre-game show about new advances in early detection. In addition, a public service announcement featuring Dr. Melissa Geck, will air on the scoreboard. The first 10,000 fans arriving at the game will receive pink “thundersticks” that light up when being used. Fans will also be able to join the Pink Army and enter to win fun prizes including team autographed Tampa Bay Lightning pink hockey sticks.

“We are very pleased to once again partner with Florida Hospital to bring awareness to breast cancer research, as well as early detection and prevention,” Lightning President Steve Griggs said. “Florida Hospital continues to be one of the Lightning’s top-tier community partners and is renowned both locally and nationally for their exceptional medical services.”

The Pink Army
The Florida Hospital Pink Army is a community effort to increase awareness about early detection and prevention of breast cancer. As a Pink Army solider, each time you complete one of the missions you will move up a rank and be rewarded accordingly. Learn more at JoinThePinkArmy.com or call (855) 808-PINK today to schedule a priority mammogram appointment.

About Tampa Bay Sports and Entertainment, LLC
The 2004 Stanley Cup Champion Tampa Bay Lightning and the leasehold rights to Amalie Arena were purchased by an entity controlled by Jeffrey Vinik in March, 2010. Shortly thereafter, Vinik also purchased the Tampa Bay Storm of the Arena Football League. Since acquiring these assets, Vinik has spearheaded a complete brand and business transformation of the teams and the arena under the banner of Tampa Bay Sports and Entertainment, LLC. The Lightning advanced to the Eastern Conference Final of the Stanley Cup Playoffs in 2011 and Amalie Arena received a $42 million renovation later that summer. The following summer the organization announced plans to install a new center-hung scoreboard, larger than any other arena in the United States and Canada. Under the new ownership and management group, the fans have responded, more than doubling the team’s season ticket base. Vinik and the rest of his management team continue to move the organization forward with eyes on success on the ice as well as a world class organization off of it.