The launch is a sneak preview of HyprKey’s far more advanced fraud-elimination and mobile payments protocol. 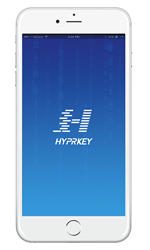 HyprKey offers a sneak peak at its password manager app, which will launch mid-November.

We seek to end fraud by making it possible for the world to use three-factor authentication seamlessly with any and all identity-based applications.

HyprKey, the Silicon Alley fintech and cybersecurity startup, announced today that it will soon launch Phase 1 of its biometric mobile payments platform.

The November launch of HyprKey will introduce users to a convenient method of user authentication for use on mobile and desktop devices. Phase 1 of Hypr Corp.’s mission to rid the world of identity theft takes the form of a mobile app and web browser extension. Supported operating systems include Android and iOS, while supporting browsers will include Google Chrome, Safari, Firefox, and Microsoft Internet Explorer.

The launch is a sneak preview of HyprKey’s far more advanced fraud-elimination and mobile payments protocol, which will undergo a broad beta test in Spring 2015. Through its biometric authentication gateway, the company aims to redefine payments by enabling users to authorize transactions with three-factor security. The purpose of a biometric token is to enable true three-factor authentication by combining Something I have, something I am, and something I know to replace the password.

“The HyprKey password manager app launches in November with the goal of replacing password entry to the Internet with our seamless method of identity verification. By logging in with the HyprKey app, users are able to eliminate the threat of hacking through malware, viruses, and compromised networks. We don’t want to tell users how to generate and store their passwords, but we do want to change the way they enter their passwords,” said HyprKey CTO Bojan Simic, architect of the HyprKey proprietary software.

By removing password entry from the point of compromise – the login screen – HyprKey allows authentication on both mobile and desktop sites without risk of keylogging, malware, compromised networks, or other variants of man-in-the middle attacks. The HyprKey app will be available for download on both iOS and Android platforms on November 16th.

Meet the HyprKey team and get acquainted with the company’s path-breaking technology at the Empire Startups Summit and the International CES.