Recently, LenoRF, a well-known electronics accessory manufacturer, has unveiled its new range of SMA Edge Mounts. On its website, all the newly announced SMA Edge Mounts are available at discounted prices, up to 35 percent off. 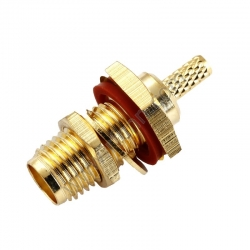 Recently, LenoRF, a well-known electronics accessory manufacturer, has unveiled its new range of SMA Edge Mounts. What’s more, the supplier has launched a big promotion to expand its market share. On its website, all the newly announced SMA Edge Mounts are available at discounted prices, up to 35 percent off.

"We are glad to release our new SMA Edge Mounts for customers from around the world. As is commonly noted, the demand for practical SMA Edge Mounts is huge in the global market. Thus, our major officials decided to create these new SMA Edge Mounts. Please pay attention that the promotion will last until November 19, 2014,” the company’s development manager says.

As a matter of fact, the company has introduced a lot of advanced machinery and high technology from developed countries. The totally automated production process enables the company to create top quality products in a large number.

The company is famous for high quality electrical accessories that are available at unmatched prices. Along with affordable SMA Edge Mounts, LenoRF provides a huge selection of useful items, including coaxial cable connectors, semi rigid coaxial cables, RF cable connectors, SMA cable connectors, and so on. Many of them are warmly welcomed in the international market. Thus, it has now become a popular brand among worldwide consumers.

About LenoRF
LenoRF is an online supplier of high end electrical equipment. It is a China based company that aims to provide customers with high quality products at the lowest possible prices. Customers can try the company’s products through sample orders with a long-term contract. Most customers come back soon after receiving their first deals.
More details about the company’s useful products can be found at http://www.rfcnn.com/SMA-JACK-REVERSE-POLARITY-EDGE-MOUNT-FOR-PCB-RF-CONNECTOR-448.html.