Costs of solar energy in America has fallen by 14% over the last year from $4.41 per watt in September 2013 to $3.76 per watt in October 2014 according to data collected by leading solar energy cost calculator websites Solar-Estimate.org and SolarPanelTalk. 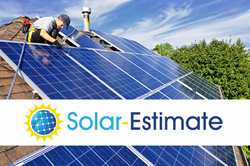 Data released today by SolarReviews.com shows that despite stable wholesale prices of solar panels and the imposition of anti-dumping tariffs on some imported solar panels the average cost of solar energy has continued to fall over the last 12 months.

The Solar Estimate site houses a solar calculator that has been used by more than 100,000 Americans to get a ballpark estimate of what a solar system will cost. Approximately 200 solar installers contribute to this estimator by entering into the site the cost per watt they charge for solar systems between the size of 1kw and 10kw. This gives Solar Estimate a unique vantage point from which to watch solar price movements.

Data is then cross referenced with solar price data entered by consumers into the leading solar discussion forum website SolarPanelTalk. Consumers enter quotes they receive from solar installers into this site to ask other members of the forum whether or not they have been offered a good deal.

“We continue to see a great disparity in pricing between states where solar incentives have created high demand and states where lower incentives or lower power costs mean lower demand. In states with low demand prices are significantly higher as installers in these states do not have economies of scale,” remarked Andrew Sendy, Chairman of Denver based SolarReviews.com , the owner of the Solar-Estimate.org and the SolarPanelTalk.com websites.

Mr Sendy commented further that, “the drop in retail prices has been surprising given that we have had stable wholesale prices for solar equipment followed by the imposition of tariffs on panels made with Chinese and Taiwanese cells.”

The fall in prices appears to be driven by increasing economies of scale among solar installers along with the effects of increasing competition.

Competition is being driven also by consumers use of websites such as SolarReviews, Solar-estimate.org and SolarPanelTalk. Consumers are able to use these and other similar sites to find out what a good price is for a solar system, the reputation of solar installers from whom they are getting quotes and to get peer feedback from other consumers who have already installed a solar system. The unprecedented access consumers now have to good information is also contributing to the downward movement of solar prices.

SolarReviews.com is a Denver based provider of consumer information websites for residential solar. The company was founded in 2012 and purchased the http://www.solar-estimate.org website in February 2013. In April 2014 the company purchased America';s leading solar forum website, SolarPanelTalk, and now provides solar related consumer information to approximately 2 million unique visitors to its websites each year.