This single is presented by Coast 2 Coast Distributions. 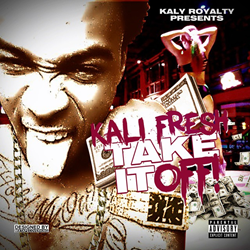 Coast 2 Coast Mixtapes presents the release of the "Take It Off" Single by Kali Fresh. This single is currently available to listen to and download.

The party scene in Los Angeles, California, is currently a "hot spot" and focal point for most of the up and coming artists. Emerging artist, Kali Fresh is on a mission to make something that would fit in perfectly while maintaining a unique approach. "Take It Off" is a song for the more mature women. This is a track that might help release a woman's inner Stripper, giving them the feeling to be free, "turn up", and " take it off", something that even the average "Good Girl" can enjoy on a night out.

Kali Fresh is a young, ambitious artist from Compton, California. Growing up in a despairing environment, Kali maneuvered through life and obtained the necessary skills to do more than just survive. The absence of his mother for the past 21 years has been the spark to this artists' ambitions, hunger, growth, and the need to succeed. Kali fell in love with the 808s and the art of the delivery at a young age, and began perfecting his craft. As a self proclaimed "prophet for the hood", his goal is to not only succeed, but leave an unforgettable impact on the music industry.

For more information on Kali Fresh, check out his twitter at: @YungOsOFRESH.