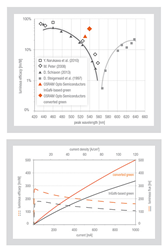 Continuous improvement of the blue LED chips, an optimized excitation wavelength and an increased degree of conversion of the phosphor converter are the winning combination underlying this new record-breaking LED.

The “Hi-Q-LED” project funded by Germany’s Federal Ministry of Education and Research (BMBF) has made pioneering advances with green LEDs, greatly diminishing what is known as the “green gap” phenomenon – the significant drop in efficacy in the green spectral range. The result is a green-emitting LED based on indium gallium nitride (InGaN) semiconductors that achieves a record efficacy of 147 lumens per watt (lm/W) at a wavelength of 530 nanometers (nm) and a spectral width of 35 nm. In addition, another green LED developed by combining a blue chip with a phosphor converter has achieved a record-breaking efficacy exceeding 200 lm/W.

As part of the “LED Lead Market Initiative” funded by the BMBF, the working group for “Efficient LED Solutions with High Color Rendering Indices” in the “Hi-Q-LED” project headed by Osram Opto Semiconductors has developed two ground-breaking green LED prototypes.

Green all-InGaN LEDs close the “green gap”
Conventional LEDs show a significant efficacy drop at wavelengths above 500 nm – a phenomenon known as the “green gap”. Research activities in the framework of the project have enabled the development of a narrowband green LED with a record efficacy of 147 lm/W for a chip size of 1 mm2 and a driving current of 350 mA (current density: 45 A/cm2). The LED has a central wavelength of 530 nm and a forward voltage of 2.93 volts (V) at this current density. A reduction of the carrier density in the light-emitting layers and a significantly improved material quality were the key factors behind this breakthrough. Thanks to a significantly reduced dependency of the efficacy on the operating current compared to conventional green LEDs, the LED prototype shows significantly improved performance at higher current densities and achieves as much as 338 lumen (lm) at 125 A/cm2. “InGaN-based LEDs, in which the light output is generated by an InGaN semiconductor exclusively, offer a much more narrowband emission with a spectral width of approximately 35 nm compared to green LEDs that are based on phosphor conversion,” explained Dr. Andreas Löffler, Project Manager at Osram Opto Semiconductors. “This breakthrough is an enabling technology for highly efficient projection systems requiring a high color rendering index. After all, a high color rendering index or an increased color gamut means a more vivid, higher-quality image.”

Record-breaking efficacy of >200 lm/W achieved with a green full conversion phosphor solution
The second approach of the project, which was to create a new, even more efficient green LED, comes into play in cases where the spectral bandwidth of the LED is not critical. Record-breaking figures demonstrated were 209 lm/W (210 lm) with a chip size of 1mm2, a central wavelength of 540 nm, a forward voltage of 2.88 V and a driving current of 350 mA (current density: 45 A/cm²). For a current density of 125 A/cm2, it proved possible to increase the light output to above 500 lm. Despite this high current density, the efficacy of these devices reaches 160 lm/W. The efficacy peaks at 1.5 A/cm² with a maximum of 274 lm/W. According to Osram research engineer Dr. Thomas Lehnhardt, these exceptional performance figures have been achieved thanks to the optimized interaction of chip and converter technologies. “Continuous improvement of the blue LED chips, an optimized excitation wavelength and an increased degree of conversion of the phosphor converter are the winning combination underlying this new record-breaking LED,” he explained.

From prototypes to series production
At the moment, the unprecedented figures achieved by the two LED prototypes still can only be ranked as development data. Further time will be needed to develop products based on the findings of the research project – products that offer optimized price and performance and are well-suited for mass production.