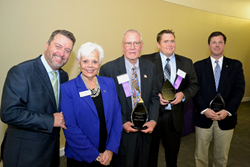 Alzheimer’s education, along with overall awareness of help available, have always been essential in what we do

On Wednesday November 5, 2014, Seniors Guide was presented the 2014 Alzheimer’s Advocate Award by the Greater Richmond Alzheimer’s Association for their support of the fight to end Alzheimer’s Disease.

“Alzheimer’s education, along with overall awareness of help available, have always been essential in what we do”, says Katharine Ross, Vice President of Seniors Guide.

“With the growing rate of seniors and baby boomers being diagnosed with Alzheimer’s, it’s something we are going to continue to support”, says Ross.

During the month of November, Seniors Guide and http://www.SeniorsGuideOnline.com have “gone purple” to raise awareness to the fight to end Alzheimer’s Disease.

“Alzheimer’s not only affects the patient, it also impacts the caregiver and surrounding family members”, says Ross.

Along with Seniors Guide, other recipients of the 2014 Alzheimer’s Advocate award were Virginia Delegate Christopher K. Peace and Robert B. Shaefer. Appointed by Governor Mark Warner to the Virginia Alzheimer’s Disease and Related Disorders Commission, Schaefer continues the fight.