This Mixtape Is Presented By Coast 2 Coast Distributions 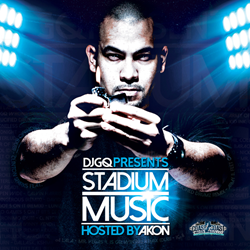 Coast 2 Coast Mixtapes presents the release of the "Stadium Music" mixtape by DJ GQ. This mixtape is currently available for download. DJ GQ enlists the help of Akon, as a host, on this new offering, which features David Guetta, T-Pain, Sage the Gemini, Afrojack, Jason Derulo, Steve Aoki, Tim Rex, and more.

DJ GQ plays for the masses with the masterful blends of house, hip-hop, reggae, pop, and even rock, setting him apart as a favorite among partygoers and club owners who enjoy high-energy, enthusiastic crowds that stick around until the lights come on.

From a 15 year old promoter in Jamaica to a nightclub icon in Miami, DJ GQ's resume reads like that of the music industry elite. He's rocked venues in every major U.S. market, from chic boutique parties on South Beach, to crowds of over 40,000 in L.A. He's wowed international hotspots, such as Belize, the Bahamas, Romania, and Switzerland.

Still, DJ GQ has remained ever the student, diligently observing and adapting to the music culture; growing in experience and skill, while avoiding fads and the lure of forsaking his craft for quick money. With an incredible work ethic and aggressive pursuit of excellence, GQ is one of the busiest and most respected DJs in the game, he is currently a mixer on the number one top 40 Station in Florida, Y100, a guest mixer for 95.7 the Beat in Santa Maria, California, Hot 103.5 in Huntsville, Alabama, and Star 92.7 in the Cayman Islands.

Keep up with DJ GQ on twitter at: @DJGQ