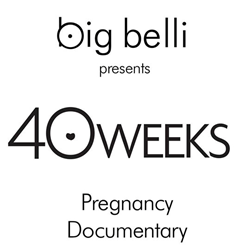 Big Belli – an industry leading video resource for expecting families – announces 40 WEEKS film to premiere on December 1st at the famed Angelika Film Center in New York City and will subsequently premiere in nine additional cities through January 2015. 40 WEEKS is the first unscripted documentary film to offer an intimate window into the week-by-week journey of pregnant women across the country. 40 WEEKS is directed by Christopher Henze and supported by Dominique Debroux, Kurt Engfehr, April Merl, Kate Rolston, and Lisa Singer.

40 WEEKS will be premiering in the following cities:

Director Christopher Henze says, “40 WEEKS is an incredible opportunity for me to honor my wife, my family, and all mothers, for being willing and able to go through this beautiful transformation. While the market is awash with media about conception and parenting, no documentary project has ever sough to fully explore the emotional journey of each of the forty weeks of pregnancy.”

40 WEEKS explores the emotional and physical changes through pregnancy, the hopes and fears and the confusing and often difficult choices that can be presented during this time. 40 WEEKS follows the diverse stories of the following “real” American couples:

To bring you 40 WEEKS, Big Belli has partnered with the Association of Women’s Health, Obstetric and Neonatal Nurses (AWHONN), HealthyWomen.org, and the March of Dimes to provide expertise and support as you journey through your pregnancy from announcement to birth.