"The best cup of coffee I have ever tasted"

Coffea Technologies will introduce the “Next” Model, with touch screen interface at the International Hotel Motel & Restaurant Show November 9-11 2014 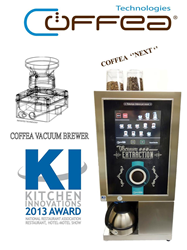 "The best cup of coffee I have ever tasted".

Coffea Technologies is an inventive manufacturer of patented coffee brewing systems that can deliver single cup or a full carafe, using their exclusive Vacuum Extraction.

November 7, 2014: Coffea Technologies is proud to introduce the latest addition to the family to be officially unveiled at the IHMRS 2014:

The Coffea “NEXT”
An intuitive tactile interface, allows guests with the touch of a button to be served SCAA Gold Cup Standard, while using less coffee to achieve spectacular flavor. While operators can benefit from brewing time to feature personalised messages on a 10 inches video screen.

Guests will notice the difference with the first taste, as only Coffea can precisely control all the variables involved in brewing a truly outstanding cup of coffee.

Winners of the prestigious National Restaurant Association “Kitchen Innovation Award,” the super automatic coffee brewers have been described as "must have" equipment for hospitality industry leaders wishing to respond to increasing market demand for a better coffee experience.

We invite you to visit us in New York at the International Hotel, Motel & Restaurant Show (IHMRS) Booth#1425 - November 9-11 2014 or find out more at http://www.coffea.ca