The Kickstarter crowd has spoken as Blankillow hits its goal within days of launching. 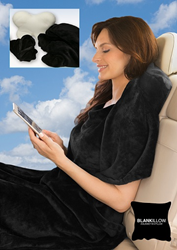 Blankillow hit 100% of goal within days of launching on Kickstarter.

"Everyone loves the idea of this amazingly soft poncho blanket in a memory foam pillow," says Alivia Arabo, founder of Augustine Innovations and inventor of Blankillow.

Kickstarter is a crowd funding platform that has been used to bring many new ideas, projects, and inventions to life. The Blankillow launch created fireworks when 82% of its goal was reached within 48 hours.

"Everyone loves the idea of this amazingly soft poncho blanket in a memory foam pillow," says Alivia Arabo, owner of Augustine Innovations and inventor of the Blankillow. Blankillow is a simple concept and folks are extremely excited to purchase Blankillow because their comfort needs are finally being met. Hurry and see what all the hype is about and grab a Blankillow while it is still less than regular retail price on Kickstarter. https://www.kickstarter.com/projects/1411648080/blankillow-a-blanket-in-a-pillow

Many people are familiar with crowd funding giants like Kickstarter. It is a great sign of success when an invention achieves it's goal within days of launching. Blankillow will allow backers to choose the first six colors initially manufactured.

"We knew Blankillow would be a great hit once we received the feedback from people all over the United States," says Arabo. Most people love the snuggly soft poncho blanket just as much as the tooth shaped memory foam filled pillow.

Blankillow has received backers from as far away as Australia! "We will have to wait and see whether this creates a poncho wearing pub crawl in the near future," says Arabo.

Blankillow comes in two completely different designs and sizes, the home and travel versions. "We modified our concept to suit what consumers wanted. For instance, the poncho idea was created so the blanket can be worn while traveling. The memory foam in both designs is used for the utmost comfort because we did not want throw pillows on the sofa that looked nice, but were not comfortable.”

You should really check out Blankillow. It must be worth your time and interest considering it hit its funding goal within hours and days of launching. Hurry up and grab Blankillow while it is still less than retail price at https://www.kickstarter.com/projects/1411648080/blankillow-a-blanket-in-a-pillow