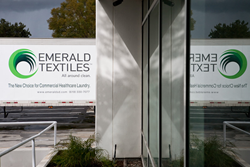 “It is an honor to be nominated in the 2014 Ernst & Young National Entrepreneur Of The Year awards. I’m delighted to be part of this group of highly regarded CEOs across the nation, who can really be credited as game changers in our global economy”

Emerald Textiles is pleased to announced that its CEO, Tom Gildred, has been nominated in the 2014 Ernst & Young National Entrepreneur Of The Year® awards. Ernst & Young’s Entrepreneur Of The Year award is the country’s most prestigious business award for entrepreneurs. The award encourages entrepreneurial activity and recognizes leaders and visionaries who are building and leading successful, growing and dynamic businesses, through regional, national and global awards programs in more than 140 cities in 50 countries. Judging is conducted by an independent panel of judges.

In 2012, Gildred won Entrepreneur Of The Year at the regional level and went on to become one of the national finalists that year. He has again been nominated at the national level in 2014. The Entrepreneur Of The Year awards gala is the culminating event of the Ernst & Young Strategic Growth Forum® and is held in Palm Springs, California. The awards gala and announcement of the winners will take place in November and will be hosted by Seth Myers of Saturday Night Live fame.

Past local winners of the national award include Irwin Jacobs Founder (Qualcomm), Peter Farrell (ResMed) and Earnest Rady (American Assets), as well as winners across the nation such as Linked In, Chobani, GoPro and Zillow.

“It is an honor to be nominated in the 2014 Ernst & Young National Entrepreneur Of The Year awards. I’m delighted to be part of this group of highly regarded CEOs across the nation, who can really be credited as game changers in our global economy” said Gildred. “I would like to congratulate all of those who were nominated and say ‘thank you’ for what you are doing to make a difference.”

Gildred is CEO of Emerald Textiles a Southern California Healthcare laundry provider. Through his leadership, the company built a facility that has won awards from the California Public Utilities Commission (CPUC) and SDG&E for their extreme energy savings. In less than four years of operations, Emerald captured significant market share throughout Southern California, and the company currently provides service to over 90% of the hospital beds in San Diego. Not only has Emerald been successful in growing its business, the company saves a staggering amount of water and energy through its eco-friendly processes. Within the first year, Emerald’s facility was saving over 40 million gallons of water and 750,000 therms of natural gas annually. Today, innovations and investment in new equipment result in additional savings totaling upwards of 70 million gallons of water each year.

Since achieving Ernst & Young Entrepreneur Of The Year award National Finalist status in 2012, Gildred has led Emerald to increase market share in San Diego, and expand into Los Angeles by adding a second facility and several major health networks as customers.

About Emerald Textiles
Emerald Textiles provides the most environmentally responsible, high quality, linen rental and management solution for the Southern California healthcare industry. Emerald’s two facilities are located in the greater Los Angeles and San Diego areas and serve hospitals throughout Southern California and across the eastern corridor to Palm Desert. Emerald utilizes the most advanced technology and provides a higher standard of cleanliness, industry compliance and customer satisfaction.

For more information about Emerald Textiles and its services, please visit EmeraldUS.com