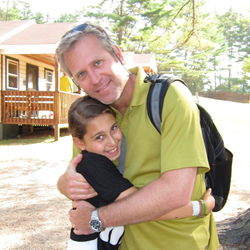 Zoe Butchen with her dad, Jeff

“When I first found out that my Dad had Parkinson's, I wanted to see if I could do something to make it better for him and other people living with the disease,” says creator Zoe Butchen.

If Taylor Swift’s new song “Shake It Off” didn’t make you sing and dance already, get ready to jump onto the dance floor. The “Dance/Shake/Donate” Challenge is the newest viral fundraising campaign to hit the cyber-waves, raising money for Parkinson’s Disease. The clever campaign, which uses the hit song by pop star Taylor Swift as its theme, is the brainchild of a 14-year-old Connecticut girl whose father, at age 51, was diagnosed with Parkinson's disease last year. The mission is to raise awareness for the disease that impacts the lives of millions of people worldwide.

“When I first found out that my Dad had Parkinson's, I wanted to see if I could do something to make it better for him and other people living with the disease,” says creator Zoe Butchen. “Our family joke has been for Dad to 'shake it off,' so when the song by Taylor Swift came out and I watched the video of all the people dancing and shaking, I thought that it would be a perfect thing to use to raise money and awareness.” After a family brainstorm led by Zoe, the family agreed this was a great idea and decided to figure out a way to make this into a big effort that could follow in the impressive footsteps of the ALS Ice Bucket Challenge.

The "Dance/Shake/Donate" campaign, which Zoe launched October 10th, features Zoe's Story of Parkinson's and challenges people to film themselves dancing and shaking to “Shake It Off,” to post the video on Facebook, to make a donation through this link and then challenge others in the video to do the same. In just a few weeks, the campaign has already raised over $22,000.

“I’m overwhelmed to witness my daughter’s enthusiasm for the project, and to see the community respond with such excitement and kindness is beyond words,” says father, Jeff Butchen. “Her friends have been sending her emails saying, 'This is amazing,' and telling her that they have an uncle or a grandfather with Parkinson's or know someone who has it,” he said.

The family has teamed with the Michael J. Fox Foundation for Parkinson's Research to collect the donations, 100 percent of which will go directly to research.

“It’s all because Zoe heard the song and had the spark of an idea,” he said. Now they hope Taylor Swift will personally get involved. “We would love to see Taylor tweet it out and connect her song to a cause, to a young girl who’s not only trying to make a difference in her father’s life but in the lives of millions of people with Parkinson’s disease,” Butchen said. Butchen, who was diagnosed with Parkinson’s last April at the age of 51, said that not everyone in his life knew that he had Parkinson's disease until they saw the video and learned of the campaign. “It’s nothing to hide,” he said. “If people don’t know, they won’t take action.”

The Butchens are organizing a town wide dance video event on November 22nd, and the entire town of Ridgefield, Connecticut, whose Main Street will be closed down for the morning thanks to the town’s First Selectman, Rudy Marconi, is invited to participate in the initiative. They hope, too, that this will spread virally from town to town across the nation, and even globally.

“The positive energy and support surrounding Zoe’s efforts is unimaginable”, says mom, Heather, “ and we hope that in addition to spreading Jeff’s positive attitude, the Dance/Shake/Donate campaign will amass funds to significantly help its research efforts and find a cure.”