Pixel Hall Press’s Daniel Grotta – the author of the novella “Honor” – reflects on the nature of heroism, honor and courage. 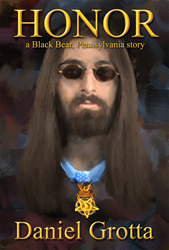 Perhaps heroism needs to be redefined as something normal, expected, a standard of speaking up for or helping others. Ordinary people can be and are heroes. And I honor them.

The 11th hour of the 11th day of the 11th month – Veterans Day – was set aside for the nation to reflect on and honor the sacrifices made by the men and women on the battlefield. Daniel Grotta, the author of the novella “Honor,” suggests it should also be a time of personal commitment. “Heroism isn't something that is reserved only for war,” he said. “Heroes are ordinary people who are thrown into extraordinary situations, dig deep and make the choice to put the safety, well-being or lives of others before their own.”

A former war correspondent, Daniel Grotta said, “I have seen the best and the worst of people. Because – or perhaps despite that, I still believe in the human spirit and am optimistic about what every individual is capable of doing.” He rejects the idea of super-heroes, of people who are above the rest of us.

“I’m not saying that it’s easy to be a hero. Far from it,” Grotta explained. “To have the courage to listen to an internal better self – a personal sense of honor -- when self-preservation would require running in the opposite direction – I am in awe of those who have made that decision, especially under fire. But isn’t it wonderful to know that just before that moment of heroism and immediately after it, those men and women were just like everyone else? That means it’s something innate in every person. And that gives me hope.”

Daniel Grotta suggests, “Perhaps heroism needs to be redefined as something normal, expected, a standard of speaking up for or helping others. Ordinary people can be and are heroes. And I honor them.”

About "Honor" and Daniel Grotta

In the novella “Honor,” Jeff Smith carries a guilty secret from the Vietnam War era that he must overcome to help his daughter realize her dream. It explores the question: What is it to be honorable?

While the public is welcome to download and read an excerpt of "Honor," for the next month, any veteran or serving member of the U.S. armed forces may receive a complimentary eBook of the novella by contacting Cynthia Dadson of Pixel Hall Press (cynthia[at]pixelhallpress[dot]com).

In addition to having been a war correspondent, Daniel Grotta has worn just about every hat in publishing, including investigative journalist, syndicated columnist, editor and so forth. His thousands of articles, reviews and columns have appeared in major magazines, newspapers and online journals. He has authored several books, including” J.R.R. Tolkien: Architect of Middle Earth,” the renowned first biography of the creator of “The Lord of the Rings.” A member of the National Book Critics Circle, Overseas Press Club, The Authors Guild and American Society of Journalists & Authors, Daniel was also a long-time volunteer driver for his town’s ambulance corps, helping hundreds of his neighbors in times of need.

Pixel Hall Press is a relatively new, old-fashioned small publishing house whose focus is on discovering literary gems and great stories that might otherwise be overlooked. Our mission is to publish books that energize the imagination and intrigue the mind, and to be a conduit between readers and provocative, stimulating, talented authors.

In this era of digital technology, Wall Street involvement and merger mania, many mainstream publishers seem to have lost sight of core principles and the purpose of publishing. At the other end of the spectrum is the veritable avalanche of self-published books that are notoriously uneven in quality. Small boutique imprints like Pixel Hall Press are reclaiming the heart and soul of publishing by reviving the idea that a publisher's core purpose is finding and nurturing great writers, and to provide readers with beautiful, meaningful, truly enjoyable books.

Read an excerpt of "Honor" by Daniel Grotta