All claims of the patent asserted against Primera's Signature Slide Printer by Accuplace of Plantation, Florida are ruled invalid. 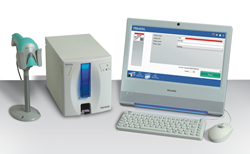 We are pleased that the USPTO agreed with our position that every single claim in the patent asserted by Accuplace is invalid.

Primera Technology, Inc. (Primera), a leading global manufacturer of specialty printers, today announced that the United States Patent and Trademark Office's (USPTO) Patent Trial and Appeal Board (PTAB) has agreed with Primera's contention that all claims of U.S. Patent 8,013,884 asserted against Primera and its Signature Slide Printer by Accuplace of Plantation, Florida are invalid. A short video of Primera's Signature Slide Printer can be found at http://bit.ly/1EBsiEl.

Primera petitioned the PTAB after being sued by Accuplace in the Middle District Court of Florida in November 2012, case no. 6:12-cv-01727-RBD-DAB, for allegedly infringing twenty separate claims of the patent ("the '884 Patent").

Primera and its legal team from Faegre Baker Daniels filed its petition, Case no. IPR2013-00196, with the PTAB under the rules of Inter Partes Review (IPR). During the IPR proceedings, Primera submitted multiple prior art references that showed that the various purported features of the claims were already known in the industry long before the '884 Patent and that these references rendered the '884 Patent claims obvious and therefore unpatentable. A final decision by the PTAB in Primera's favor was issued on July 17, 2014.

Accuplace requested a re-hearing before the PTAB in August 2014 and was denied. Accuplace therefore agreed to dismiss the Florida action against Primera. The Florida court issued an Order of Dismissal of the original lawsuit on November 12, 2014. The case is now closed.

"This decision by the PTAB affirms Primera's belief all along that there was no merit to Accuplace's claims against Primera," said Mark D. Strobel, Primera's vice president of sales and marketing. "We are pleased that the USPTO agreed with our position that every single claim in the patent asserted by Accuplace is invalid. With this matter behind us we can now focus more clearly than ever on helping pathology labs across the world to be more efficient while enhancing patient safety with our affordable and reliable Signature Slide and Tissue Cassette printers."

Headquartered in Plymouth, Minnesota, USA, Primera Technology, Inc. is one of the world’s leading specialty printer manufacturers. Its products are sold through Primera Authorized Resellers and Distributors in more than 222 countries.

For Asia Pacific, contact Primera Asia Pacific in Australia by phone at +61 3 9798 8720 or by email at sales(at)primera-ap(dot)com.

Notes to Editors: Primera and Signature are registered trademarks of Primera Technology, Inc. All other trademarks are the property of their respective companies.

Primera's Signature Slide Printer can print in both color and black monochrome.

Primera's Signature Slide Printer can print in both color and black monochrome.