Housing Markets Around US Are Getting Back To Normal

The Federal Savings Bank informs readers of recent data regarding the housing market. 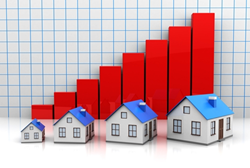 Baton Rouge, Louisiana, had the best score of all the major markets with 1.39 points, which means it's running at 39 percent above normal economic and housing activity.

According to the most recent November 6th National Association of Home Builders/First American Leading markets Index (LMI), 59 metro areas in the U.S. met or exceeded their normal economic and housing activity during the third quarter of 2014. The Federal Savings Bank finds that this report indicates housing activity throughout the U.S. is getting back to normal.

The nationwide index rose to 0.90 points from 0.89 points during the third quarter, meaning the U.S. is at 90 percent of normal economic and housing activity, according to a press release from the NAHB.

While the nation showed a small but crucial improvement, 66 percent of markets demonstrated year-over-year gains. Baton Rouge, Louisiana, had the best score of all the major markets with 1.39 points, which means it's running at 39 percent above normal economic and housing activity. Baton Rouge was followed by:

These 10 major metro areas have all reached scores that indicate normal or above-normal market activity.

"An uptick in the number of single-family permits, which is currently only 44 percent of normal activity, is the key to a full-fledged housing recovery," said NAHB Chief Economist David Crowe, according to the press release. "In the 17 metros where permits are at or above normal, the overall index shows that these markets have fully recovered."

According to the most recent October 17th data jointly released by the U.S. Census Bureau and the Department of Housing and Urban Development, single-family permits in September bumped up 0.5 percent from August's number. Privately owned housing authorizations rose 1.5 percent in September compared to August.

Small gains in housing permits and starts may not seem like improvement, but each incremental rise demonstrates the market's road back to normalcy.