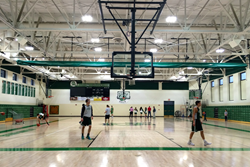 We don't want to compete on cost, but on long-term investment and value. For me and my clients, brands like Powersoft represent an advantage on many levels.

The Ottawa Hills Local School District, based just outside of Toledo, OH, is highly regarded for both its academic and athletic programming. The district, which is comprised of an elementary and a junior / senior high school and roughly 400 students, is home of the Green Bears — and considers its athletic program to be an integral part of students' overall learning experience. As an academic institution focused on providing students with a comprehensive college preparatory curriculum, The Green Bears' athletic program has won multiple state titles and excels in sports such as football, soccer, volleyball and basketball.

The athletic program at Ottawa Hills is not only appealing for enrolled students, but also for fans and spectators including alumni, staff, visiting teams and the broader community at large. The high school's gymnasium, an important venue that hosts basketball games, volleyball games and many other district activities and events, was constructed roughly a decade ago and has a capacity of 2,000 persons. This year, the gymnasium was outfitted with a new, state of the art PA system comprised of Powersoft and EAW components.

The catalyst for the sonic upgrade was lack of intelligibility, reports Eric Harter, President of Montpellier, OH—based Harter Sound. "They have a fairly young gymnasium as compared to most other schools," he observes. "But the problem was that all the spectators, especially alumni and athletic directors, complained that they could not hear or understand any of the announcements in the gym." Since the gymnasium is routinely used for commencement activities, meetings and other district related events, achieving audio intelligibility was a primary concern for the administration.

Out with the Old, In with K Series
Harter's firm was given the nod at the recommendation of one of the administration's technical directors who had worked with him in the past. The first order of business was for him to evaluate the existing environment, the legacy sound system and determine what needed to be done differently to achieve greater intelligibility. Harter notes that the legacy sound system consisted of four powered cabinets placed at center court, each with an estimated frequency range of between 500 Hz to 12 kHz. The speaker placement proved to be inefficient and cumbersome, and the technical crew tried to adapt it to different events by merely aiming speaker cabinets in various directions depending on the activity in the gymnasium. "Unfortunately, the system had been put into place without taking into consideration speaker positioning, time alignment, EQ and power requirements," Harter says.

The acoustic environment itself was sound however, so after removing the existing components Harter's team was soon able to focus on equipment choice and integration. "We did not have to do much acoustic work outside of choosing the right equipment components, putting them in the right places and powering them properly," he recalls. After determining the different locations where the audience would be seated and each respective distance from the sound source, Harter selected a two-way point source system consisting of ten speakers in three different 'zones' across the length of the gymnasium. Each speaker was placed horizontally rather than vertically approximately 18' from the floor, enabling the system to maintain a relatively low profile. The speaker height and horizontal orientation also made it less likely to be struck by an errant ball, intentionally or unintentionally.

At the core of the new system were three K series amplifiers, each driving respective zones consisting of 12" woofers and for high frequencies, a single 1.75" driver. According to Harter, one of the reasons Powersoft was chosen was because of its ability to drive such a substantial amount of power while taking up just three rack space units. Another reason was that the system amplifiers could be set up in a secure location and controlled remotely using Powersoft's Armonia software. "We set it up so that if someone gets access to the rack, they can't change anything unless they know exactly what to do and how to do it," explains Harter. "The sole person with the 'key' is technology director, who we've trained how to use the system and the software."

To Armonia and Beyond
With Powersoft's Armonia software, all the key features of the new PA system are literally at the fingertips of the technology director. "We put an ethernet system in place and it hooks up to the WiFi — it was very easy to configure," he says. "We can enable everything from EQ, to delay to trimming different zones up and down. But all they really needed to be able to do was turn the different zones on and off or up and down, and they can now do all this wirelessly using the Powersoft Armonia application. It is incredibly easy to operate during a game or other event."

From a broader project perspective, it was important for Harter to ensure that Ottawa Hills Local School District was pleased with the gymnasium sound system, since his company is being considered for a much larger, football stadium project due to kick off in the spring. "We wanted to make sure that whatever we did in the gymnasium left a very good impression so that we are the ones the district wants to partner with on other projects," says Harter. "In this regard, Powersoft and EAW took us a long way towards achieving our goals."

Making the Right Choice
While the Powersoft K3s were not the least expensive product under consideration, they were the clear long-term value choice. "We were asked why the Powersoft units were more expensive than other more common brands,' recalls Harter. "Our response was that the Powersoft units take up less rack space, are extraordinarily reliable, and the power efficiency is spectacular. Once we got past the initial sticker shock, the conversation shifted to value based topics like reliability, intelligibility, power conservation and size and space requirements — soon enough my client agreed that it was the right choice."

"The administration is just thrilled," Harter concludes. "They realize they purchased a premium product that is not 'middle of the road' and that it delivers precisely what was needed for this installation: plenty of power, headroom and remote capabilities — all in a small physical space that is contained and secure." Harter says that Powersoft's premium amplifier solutions help distinguish him from the crowd: "We are not the lowest price guy in this market, but we believe there is a reason for that. We don't want to compete on cost, but on long-term investment and value. For me and my clients, brands like Powersoft represent an advantage on many levels."