Mediacom Business provides over 5,000 fiber route miles in Iowa, connecting more than 2,500 locations with speeds up to 10 Gigabits per second. 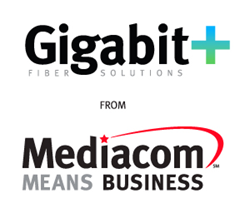 Mr. Finch told mayors from twenty cities in the Metro Des Moines Area, along with numerous Iowa State Legislators, that his company has over 5,000 fiber route miles already in service in Iowa. This expansive network, said Finch, connects more than 2,500 locations, and is capable of delivering speeds up to 10 Gigabits per second.

“While companies like Google are making promises to build these networks in large metropolitan areas, Mediacom Business’ fiber-optic network is already in place right here in Iowa. We’re delivering speeds of one Gigabit and beyond to business customers of every size over our proprietary, fiber-optic network,” Mr. Finch said.

The City of Grimes, one of the fastest growing areas in Iowa, has approximately 400 small-to-medium sized businesses. Grimes is an excellent example of how Mediacom Business partners with municipalities to build the critical broadband infrastructure that powers economic development. According to Mr. Finch, “Mediacom Business is inviting other cities to have these conversations with us so we can replicate these public/private relationships in more areas.” He added, “Increasingly, Central Iowa is attracting attention from IT companies, web developers, call centers, and data centers who demand the reliability, speed and redundancy our Gigabit+ Fiber SolutionsTM platform can provide. You could say we’re a one-stop shop in meeting the needs of every customer, no matter their size.“

A video about the City of Grimes, Iowa/Mediacom Business partnership can be viewed at: http://www.mediacombusiness.com/discover-grimes

About Mediacom Communications
Mediacom Communications Corporation is the nation’s eighth largest cable television company and one of the leading cable operators focused on serving the smaller cities in the United States, with a significant customer concentration in the Midwestern and Southeastern regions.

About Mid-Iowa Association of Local Governments
The Mid-Iowa Association of Local Governments (MIALG) is a group of mayors from Central Iowa and members from the Iowa League of Cities and Polk County Supervisors that gather once a month for dinner and a meeting. A presenter is invited to each meeting, where programs and issues affecting their communities are discussed. The current chairperson is Mayor Scott Cirksena.