Utah is Back on Top as the Best State for Business

Utah Governor's Office of Economic Development is pleased to receive the news of Forbes magazine ranking Utah #1 "Best State for Business." Utah has held the top spot in Forbes ranking for 4 out of the last 5 years. 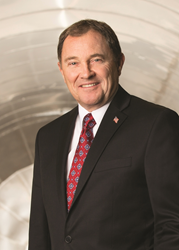 Congratulations, Utah. You are the “Best State for Business.” The state took it’s place, once again, as the number one state in the Forbes magazine rankings of “Best States for Business.” The findings released Wednesday, cite the state’s skilled workforce, low energy costs, pro-business climate and economic growth among other factors.

“We have something very special happening in our state and the rest of the nation is taking notice,” said Governor Gary R. Herbert. “Utah's success is the result of a dynamic business community that has a true partner in state government. We work to cultivate the environment for them to succeed, which is ultimately a benefit for their stakeholders, employees and all the people of our state."

Forbes writer Kurt Badenhausen highlighted Utah’s success when he wrote, “The state has a very pro-business climate and companies benefit from energy costs that are 26 percent below the national average and third lowest in the U.S. Utah’s economy has expanded 2.4 percent a year over the past five years—fifth best in the U.S. Utah is well known for its winter activities and tourism has soared since the 2002 Winter Olympics.”
(Read Forbes rankings here)

Utah moves back to the top spot where it ranked for three straight years from 2010 to 2012. With Utah at the top of the Forbes list, North Dakota came in second and North Carolina followed in third place. Utah has held the number one spot in the Forbes rankings four out of the last five years.

Utah’s place in the Forbes ranking compliments the Hatchman Index recognition of Utah as the fourth most diverse economy in the nation—with a focus on manufacturing, workforce, regulatory environment, stable tax structure and a predicatable, business friendly, economic development climate. Supporting this focus, several key strategic industry clusters have shown significant growth over the last decade in IT and software, aerospace and defense, finance, energy development, and life sciences.

With a median household income of $58,268, a job growth hovering around three percent and a cost of doing business at 12.9 percent below the national average, Utah has been able to parley its workforce strength by focusing on the complete workforce pipeline from kindergarten through advanced certificates and degrees. State government working with the private sector is actively engaged in meeting the challenges of an ever-growing demand for a highly skilled workforce.

Utah ranked in the top ten in most of the Forbes criteria: #5 in business costs, #4 in labor supply, and even though it’s a small state, these two rankings helped Utah place as #10 in growth prospects.

The state also ranked #9 in regulatory environment, which along with the other factors previously mentioned, placed Utah as #6 in economic climate.

Overall, Utah is number one. It’s proved that in four of the last five years—a small state that focuses its attention on a solid economic development really can “punch above its weight class.”

The Governor’s Office of Economic Development (GOED) charter is based on Governor Gary Herbert’s commitment to economic development statewide. Utah’s economic development vision is that Utah will lead the nation as the best performing economy and be recognized as a premier global business destination. The mandate for this office is to provide rich business resources for the creation, growth and recruitment of companies to Utah and to increase tourism and film production in the state. GOED accomplishes this mission through the administration of programs that are based around targeted industries or “economic clusters” that demonstrate the best potential for development. GOED utilizes state resources and private sector contracts to fulfill its mission. For more information please contact: Michael Sullivan, 801-538-8811 or mgsullivan(at)utah.gov.