Wonder Mike and Master Gee Mourn the Passing of Big Bank Hank: The Original Members of Sugarhill Gang Will Never Be Able to Perform Together Again 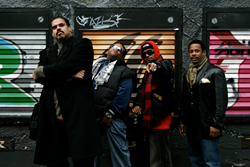 “Wonder Mike, Master Gee and Big Bank Hank will never be able to perform together as Sugarhill Gang again”, sympathetically declared Wonder Mike as he learned of the passing of his co-patriot. “The saddest part is that our world will no longer be able to watch a Sugarhill Gang performance with any original members….or a Big Bank Hank performance….but the positive side is we still have Wonder Mike, Master Gee and HenDogg performing all of our hits as our current group name ‘Rapper’s Delight’ ” http://www.therappersdelight.com/.

In 1979, three lyricist from New Jersey known as Sugarhill Gang crashed through the walls of the urban cities and into the mainstream of society with the first worldwide rap hit, "Rapper's Delight." “Rapper's Delight” eventually sold over 8 million copies, and went on to be one of the biggest selling rap singles of all time. Shortly thereafter, the Sugarhill Gang released such hits as “Apache,” “8th Wonder” and “Living in the Fast Lane.” On Tuesday November 11, 2014, Henry “Big Bank Hank” Jackson passed away at the age of 58, leaving his two co-founders Michael “Wonder Mike” Wright and Guy “Master Gee” O’Brien to carry the torch of their successes and legacy.

“Our hearts and deepest sympathies go out to our Hip-Hop brother Big Bank Hank and his family”, sadly expressed Master Gee. “There is no more Sugarhill Gang for us. But we will forever be known as the trio from Englewood, New Jersey that brought this rap game to the world. We just blew everyone’s minds with a new style of music that today has become a music standard. Rest in peace our brother.”

Wonder Mike, Master Gee and Big Bank Hank are credited by most to be the first professional Hip Hop group, because they introduced the masses (both in the United States and overseas) to this unprecedented genre of music. Today, “Rappers Delight” continues to appeal to audiences of all ages. Due to differences of opinion, the group separated years ago which is the subject of the documentary “I Want My Name Back” http://www.youtube.com/watch?v=L-W1muPO8rg. Big Bank Hank continued to perform under the name “Sugarhill Gang”, while Wonder Mike and Master Gee teamed up with Henry Williams (pka Hendogg) and DJ T. Dynasty to create “Rappers Delight”. In 2009, Wonder Mike, Master Gee and HenDogg collaborated with DJ-extraordinaire Bob Sinclar on the charting busting single “LaLa Song” http://www.youtube.com/watch?v=zD_rhcyeA5w which rose to #1 on various Billboard Charts throughout Europe.

“Fate and opportunity work in crazy ways,” HenDogg explained. “Thirty Five years ago Hank worked with Mike and Gee to bring the world amazing music. Thirty years later, I teamed up with Mike and Gee to bring the world a chart topping hit. The one constant has been Mike and Gee. Today the world honors Big Bank Hank through his passing. Tomorrow the world will celebrate him through the accomplishments of our group “Rappers Delight” which grew from the foundation that he helped create with the nostalgic Sugarhill Gang.”

Rappers Delight is currently in the studio recording a new album which they now plan to dedicate to the memory of Big Bank Hank. “Hank will forever be synonymous with four words….Hotel…Motel…Holiday Inn,” states Wonder Mike. “And we will continue to celebrate our accomplishments together for many future generations to appreciate as Rappers Delight." The group Rappers Delight is also working on a Hip-Hop based Broadway score with producer Jonathan Schwartz as well as a product line with Quantum Vapor http://www.quantumvapor.com/.

“As the Hip-Hop community mourns the loss of a true pioneer, the fans know that now the only authentic performance is a performance by the group known as Rappers Delight. Any other show is like buying tickets for a Rolling Stones concert that does not include Mick and Keith,” explains EJ Albowicz, CEO of MaxaMusic Group “ I have managed Wonder Mike, Master Gee and HenDogg since they came together in 2007 to form the group Rappers Delight. We have faced many people who have falsely claimed to be them and have falsely claimed to represent them. At the end of the day there is no substitution for the real thing and I know they will continue to honor Hank’s legacy through each performance that their group Rappers Delight brings to the world.”

The Hip-Hop community will forever revere the name of Big Bank Hank and the Hip-Hop family will continue to celebrate the performances of Rappers Delight….I said a Hip, Hop, Hippie…