Job description includes tending to the nine reindeer on the premises, overseeing all of Santa's elves, and ensuring the North Pole stays snowy all year long, plus general manager duties. 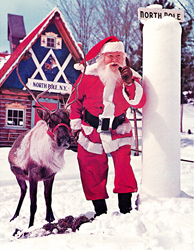 Not just anyone is suited to be the next head elf. The position requires a love for family amusement, a passion for the holiday spirit, and a genuine appreciation for Americana.

Established in 1949, the Christmas fantasy village has been a go-to destination for families for generations—offering visitors an enchanting, North Pole experience, including holiday parades and live festivities, rides, shopping, reindeer and of course, the big man in red.

“Not just anyone is suited to be the next head elf, said Doug Waterbury, Owner of Santa’s Workshop. “The position requires a love for family amusement, a passion for the holiday spirit and a genuine appreciation for Americana.”

Matt Stanley, the current general manager at the North Pole, is slated to reduce his role at the park after the 2014 holiday season.

Leading a year-round team of Santa’s helpers, tending to Santa’s reindeer and ensuring the North Pole remains frozen all year round are just a few of the duties he currently assumes as the head elf at the North Pole.

“It is a wondrous place that creates magical memories—I will be sad to leave,” said Stanley. “But it is time that a new elf takes the reins.”

Stanley plans to continue to reside in Lake Placid, near the mountainside amusement park and will work with the new head elf to ensure that the tradition of Santa’s Workshop, North Pole, NY continues.

“This park was designed by the legendary Arto Monaco,” added Waterbury. “It’s long been home to Rudolph and where letters to Santa are received from all over the world, year after year. The park’s historic significance is astounding. And it’s potential for future growth is limitless with the right elf at the helm.”

While Waterbury is fully committed to the success of Santa’s Workshop, he admits its future is uncertain unless a new head elf steps forward.

Those interested in applying for the position are invited to contact Doug Waterbury to schedule a tour and informational interview: doug(at)northpoleny(dot)com.