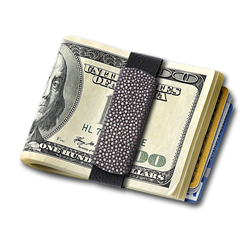 We have seen tremendous growth and success for Grand Man and Grand Band, and we believe that this trend will continue upward with the launch of our new Stingray Grand Band line.

The Grand Band Stingray Collection initially premiered in Black, Grey, and Red at the Las Vegas JCK Jewelry Show, and received promising feedback. In fact, a survey was conducted which resulted in 80 percent of women stating that they would use a Stingray Grand Band if they received one as a holiday or birthday gift. In response to this positive feedback, Grand Band has released five new additional colors this Fall.

Grand Band uses the top skin of the stingray for the leather in this collection. A tanning and finishing process is also used to obtain the deep color, as well as durability, for the money bands. Each of the different colors has its own pattern, creating a sense of uniqueness and exotic appeal. The Stingray Collection can be matched with all types of wardrobes, and also makes for an ideal gift for all special occasions.

Interestingly, stingray jewelry is believed to grant strength and authority to those wearing or using the jewelry; while others believe that stingray skin brings good luck and large fortune to those who wear and use these items.

Grand Man’s jewelry has seen astounding success since its introduction at the New York JA Jewelry Show in July 2014; and continues to see high demand for the Grand Band elastic money clip. Grand Man’s men’s jewelry can be found in many jewelry stores across the nation, from boutiques to luxurious hotel gift shops.

About Grand Band – Grand Man
Grand Man helps you find, create and present your uniqueness to the world through our array of diverse, customizable men’s jewelry. Designer Joy Ziefer has crafted a timeless brand of men’s jewelry to celebrate men’s individual styles. Grand Man encourages a man to explore who he is, be himself and celebrate a big moment (or the wonders of everyday gift-giving) in a way that expresses his own unique success. Family-owned and operated, Grand Man has blossomed from a humble enterprise into the single source for one of the country’s most desired new fashion products. Our commitment to our customers’ starts, emphasizes and ends with their happiness and satisfaction.