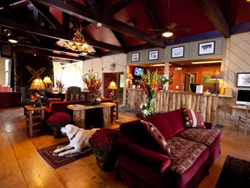 The Sierra Nevada Resort’s cozy lobby makes a perfect gathering spot for hot chocolate and stories after fun on the slopes at Mammoth Mountain as part of a new Mountain Collective package.

To celebrate its home ski area’s inclusion in the consortium, the Sierra Nevada Resort & Spa in Mammoth Lakes, Calif., will offer a special Mountain Collective package.

Back by popular demand, Mammoth Mountain Ski Resort in California has been included in the Mountain Collective for the 2014/2015 season. A ski pass collaboration between the world's best independent destinations, this year’s Mountain Collective also includes AltaSnowird (UT), Aspen Snowmass (CO), Jackson Hole (WY), Squaw Valley/ Alpine Meadows (CA), Whistler Blackcomb (BC), and Ski Banff-Lake Louise-Sunshine (AB). Described by Outside magazine as “the cool kid on the ski-resort scene” on its "Top North American Resorts" list, Mammoth Mountains is looking forward to another great season.

To celebrate its home ski area’s inclusion in the consortium, the Sierra Nevada Resort & Spa in Mammoth Lakes, Calif., will offer a special Mountain Collective package to pass holders, who will receive a 10-percent discount off Sierra Nevada Resort lodging, as well as two well drinks at the in-house bar and a complimentary ski shuttle to the slopes. Prices for the new package start at $116 per room per night (plus tax and resort fees). Mountain Collective guests must present a valid ski pass on arrival. Rooms are based on availability, and other restrictions apply. Blackout dates are December 18, 2014 – January 3, 2015.

The Mountain Collective pass, priced at $399, includes two days of skiing or riding at each of the seven destinations plus a 50-percent discount on all additional days with no blackout dates. A kid’s pass, good for ages 12 and younger, is priced at $99 for the 2014-15 season. In all, the pass grants access to 15 separate mountains with more than 38,000 acres of terrain and 212 lifts, as well as lodging deals.

The 2014/15 season represents the second year Mammoth Mountain ski resort has been included in the Mountain Collective ski pass.