Independent publisher Bitingduck Press is dedicating its 2015 catalog to hard science fiction. The newest signed book in this theme is "Come Out Tonight," the eighth novel by science-in-fiction writer Bonnie Rozanski, now available for pre-release review. 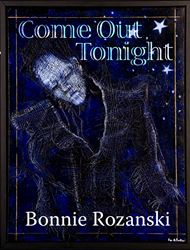 Sherry Pollack is a brilliant neuroscientist whose discoveries are changing how people sleep, but all of that is destroyed when she is assaulted and left in a persistent vegetative state. Her loving boyfriend and the detective assigned to the case both struggle to find her assailant and to bring Sherry back. Their research leads them to an array of unlikely suspects and to a surprise ending which may make readers wish they could never sleep again.

In Bonnie Rozanski’s newest novel, “Come Out Tonight,” readers don’t get to meet the heroine directly. From the first page, she’s unresponsive after a brutal attack where she is hit in the head. During their attempts to solve the crime, her loved ones and the police discover that Sherry’s research work into the neuroscience of consciousness is more than a coincidence. Employed at the fictional Vanderbilt Institute, where the most brilliant are recruited to explore their research without the burdens of teaching or grant-writing, Sherry has helped market the nation’s most popular sleep aid, Somnolux. As the detectives dig deeper into her findings, they discover that the drug might help Sherry and others with altered consciousness wake up-- but what they learn may not be what they want to hear.

Bonnie has an undergraduate degree in Psychology from the University of Pennsylvania, and Master's degrees in Computer Science and Business. She has worked in academia and business, but some years ago, in an epiphany, she decided to devote the rest of her professional life to her first love, writing. Since then, Bonnie has completed eight novels and six plays, with scientific issues generally informing the plots.

Her first book, "Banana Kiss," was published in the fall of 2005 by Porcupine’s Quill, a small Ontario literary publisher with a stellar reputation. "Banana Kiss" has earned critical acclaim in Canada and the U.S. with reviews in Foreword, Quill & Quire, the Globe and Mail, and the Trenton Times.

"Borderline," Bonnie’s second novel, was published in June of 2007 by Porcupine’s Quill. It was shortlisted as a YA finalist for Foreword Magazine’s Book of the Year Awards and received a silver medal at the 2008 Independent Publisher’s Awards. The author also has five more ebooks for Kindle. One of them, "Six Clicks Away," was a drama winner of the Red Adept 2010 Indie Awards.

Founded in March 2012 by two physicists, Bitingduck Press is an independent publisher that brings the quirky, ego-driven, and sometimes corrupt world of science to its readers. Publishing 6-8 titles per year, the press is currently accepting manuscripts for its 2016 Spring and Fall catalogs in a wide range of genres, particularly hard sci-fi and narrative nonfiction.