Pioneer in the development and rational regulation of higher education honored with the WICHE Cooperative for Educational Technologies' (WCET) top award recognizing lifetime contributions to the field. 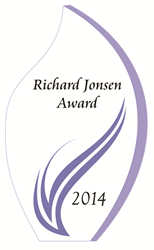 From early on, Mike encouraged WCET and its members to engage in the policy arena. - Russell Poulin, interim co-executive director of WCET.

The WICHE Cooperative for Educational Technologies is pleased to announce that Michael Goldstein, partner at Cooley, LLP, has been honored with the Richard Jonsen Award at their 26th Annual Meeting in Portland, OR on November 20, 2014. The Richard Jonsen Award is given annually to a WCET member whose career has been committed to improving postsecondary educational programs and services through innovative uses of technology as well as for exceptional service to WCET.

Goldstein spent much of his career with Dow Lohnes, PLLC, where he made significant impacts on higher education in general and online learning in particular. Goldstein and Dow Lohnes were instrumental in working with WCET and others in higher education to change the regulations regarding financial aid for distance education. These changes greatly expanded the ability for distance education students to participate in all federal financial aid programs.

Goldstein and his firm, Dow Lohnes, have been members of WCET since its early days, including bringing both firms (Dow Lohnes, now Cooley) in as supporting members, indicating a commitment to the work of WCET. Goldstein has provided both paid counsel as well as advice, guidance, and insight to WCET on matters of legislation, court rulings, and political dealings that have an impact on distance learning.

“From early on, Mike encouraged WCET and its members to engage in the policy arena. His support helped improve distance education regulations and launched WCET's leadership in educational technology policy issues,” said Russell Poulin, interim co-executive director of WCET. “He also brings a delicious wit that is funny, pointed, and always on the mark. When he slants his head and gives you that devilish look, you know that you best be prepared.”

Goldstein has been active in the development of online learning and in guiding the evolution of various kinds of institutional ventures creating innovative approaches by combining the resources and interests of the non-profit, public and for-profit postsecondary communities. Goldstein holds a law degree from New York University, a B.A. in Government from Cornell University, and was a Loeb Fellow in Advanced Urban and Enivronmental Studies at Harvard University.

The WICHE Cooperative for Educational Technologies (WCET) is the leading national, non-profit, member-driven organization devoted to advancing excellence in technology-enhanced higher education, working at the intersection of practice, policy and technology. WCET is widely recognized as one of the most informative, reliable and forward-thinking organizations regarding the role of technology and innovation in higher education. Connect with WCET - wcet.wiche.edu.