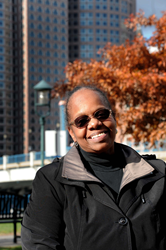 I cannot think of a more knowledgeable and dedicated champion of children than Jeri Robinson.

Ms. Robinson brings over 35 years of experience in teaching and consulting in the field of early childhood education, and particular expertise in the field of informal and hands-on learning, to this role. She is the developer of the PlaySpace exhibit, one of the earliest prototypes for early learning family spaces in children’s and other museums, founder of the Boston Cultural Collaborative for Early Learning and co-founder of both Families First Parenting programs and the innovative “Countdown to Kindergarten” program at the Museum.

“I cannot think of a more knowledgeable and dedicated champion of children than Jeri Robinson,” said Carole Charnow, President & CEO. “Her years of distinguished service to both the museum and education field will stand her in good stead as she works alongside teachers, parents, students, administrators and civic leaders to improve the lives of children across the city."

For many years, she has provided early childhood training and consultation to museums and other organizations, and has been a strong voice emphasizing the importance of early learning in the development of children.

“I am honored to have been appointed by Mayor Walsh to the Boston School Committee,” said Jeri Robinson. “This is not only recognition of my work in early childhood over the years, but more importantly confirms the role that Boston Children's Museum has played as a true partner in education and family engagement for the City of Boston.”

Robinson received her B.S., M.S. Ed. and an honorary Doctorate in Education from Wheelock College. She serves on numerous boards dealing with family, community, multicultural, and early childhood education issues. In recognition of her work, Robinson has received awards such as the Wheelock Centennial Award, the Boston Parents Paper Family Advocate Award, the Women Who Care Award, and the Lucy Wheelock Award. She was a 2004 participant in the Schott Fellowship in Early Care and Education (Public Policy), a program of the Schott Center for Public and Early Education, Cambridge MA. In 2005, she was named to the American Association of Museums, Centennial Honor Roll, in recognition of her contributions to the museum field in the past century.

Most recently, Robinson has served as a member of the Houghton Mifflin Harcourt Publishing Education Leadership Council, as a co-chair of Thrive in 5, as a co-Chair of the City of Boston’s Universal Pre-K Advisory Committee, and as a co-chair of Mayor Walsh’s Education Transition Committee.