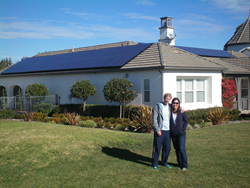 Orange County homeowners are jumping on the solar bandwagon with expiring incentive program.

The icing on the cake is that with the Orange County Solar Program, residents are actually getting paid to go solar. The time to go solar is now.

This year more than 900,000-watts of solar power has been committed to be installed throughout the county by Sullivan Solar Power. Residents have been acting quickly to cash in on the incentive program. Representatives from the company argue that there has never been a better time to go solar.

Through the Orange County Solar Program, the average homeowner that goes solar is able to own their solar power system for no money out-of-pocket, replace a current electric bill of $250 with a much lower fixed payment of $149, and receive a Federal tax credit to the tune of $7,000.

“The icing on the cake is that with the Orange County Solar Program, residents are actually getting paid to go solar,” said Daniel Sullivan, founder and president of Sullivan Solar Power, “The time to go solar is now.”

The program pays property owners 20 cents per watt, up to $1,000, and is provided in the form of a check after project completion. Limited to 1,350,000-watts, the three-phased program is currently in its final phase of funding and will run through the end of 2014.

“We created the Orange County Solar Program after the state rebate expired to help transition Orange County to clean, renewable energy,” said Sullivan, “We are offering residents an additional incentive to go solar, regardless if the solar power system is owned or leased, to change the way our region generates electricity.”

Sullivan Solar Power, located in Irvine, provides expertise and personalized services to deliver the highest quality solar power systems. Complementary site evaluations are provided by the company, where certified staff design custom proposals after analyzing a home’s historical energy consumption. Sullivan Solar Power installs the system using state licensed electricians with no subcontractors and monitors the production for the life of the system.

Sullivan Solar Power is a turnkey solar system provider that delivers solar electric projects from concept to completion with offices in the Orange County, Inland Empire and San Diego. The company has installed more than 28-million watts of solar power ranging from residential to large commercial and municipal systems. Sullivan Solar Power has a longstanding A-plus rating with the Better Business Bureau, with no complaints filed since its founding in 2004. The firm has been named one of the nation’s fastest growing energy companies by Inc. Magazine and services clients throughout Southern California. Regardless of project size and scope, Sullivan is committed to delivering the best products provided by the most qualified professionals to every customer. Visit sullivansolarpower.com for more information.