Woman Finds Out What Men Don’t Want to Talk About 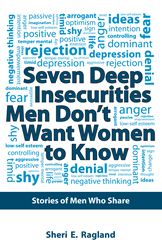 Relationships between men and women often encounter insecurities, but Sheri Ragland is up for those challenges in this book. Mixing current social data with timeless truth, she helps readers move from talking about problems to doing something about them.

CrossBooks is pleased to announce the nationwide release of Seven Deep Insecurities Men Don’t Want Women to Know: Stories of Men Who Share by Sheri E. Ragland, founder and CEO of Buzz About Relationships. The author’s interviews with a variety of men reveal their common struggles with negative thoughts, manhood, lacking open-mindedness, low self-esteem, fear of making less money than a female partner, performance issues, and pride. The book emphasizes the importance of having a strong spiritual component in a committed male/female relationship to strengthen and guide them when physical and emotional issues arise.

Uniquely constructed, Seven Deep Insecurities begins with the memoir of Robert Harris, a man from Memphis, Tennessee, who grew up in poverty and uncertainty. As a teenager in the streets, he used dominance, controlling individuals and his relationships to survive and gain respect. That approach, however, led to an adulthood marked by aggression and failed friendships and romance. Harris sought God in the face of his struggles to become a better man and father. His compelling redemption story sets the stage for Ragland to share her research about men from different walks of life who wrestle with the same insecurities but are hesitant to discuss them with women.

“My goal is to encourage more men to acknowledge their insecurities and then do something about them,” said Ragland. “There are effective ways for a man to discuss thoughts and feelings with his partner and be more open-minded about their relationship. With God at the center, a man and woman can solve relationship issues together in a humble, caring, respectful, and loving manner.”

Seven Deep Insecurities concludes with a series of reflections to spark further discussion between men and women as well as the “Do” list—action items to move these insights into practice.

Paul Mikos, publisher at CrossBooks for LifeWay Christian Resources, said, “Relationships between men and women often encounter insecurities, but Sheri Ragland is up for those challenges in this book. Mixing current social data with timeless truth, she helps readers move from talking about problems to doing something about them.”

Seven Deep Insecurities Men Don’t Want Women to Know is available now online and in stores via CrossBooks at LifeWay.com. Further information about Sheri E. Ragland’s work is at BuzzAboutRelationships.com.

An imprint of B&H Publishing Group, CrossBooks offers a unique blend of traditional and self publishing. It serves a variety of Christian writers, from established authors to Christian leaders and first-time authors. As a ministry of LifeWay Christian Resources, CrossBooks is committed to unwavering principles of excellence and Christian faith. For additional information, please visit http://www.crossbooks.com.