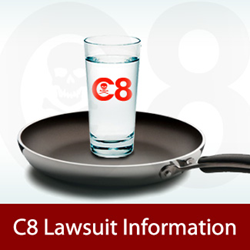 If you believe you or a loved one have been exposed to C8 contaminated drinking water, contact Wright & Schulte LLC for a FREE C8 lawsuit case evaluation at www.yourlegalhelp.com or 1-800-399-0795.

Wright & Schulte LLC recently filed 40 C8 lawsuit claims on behalf of Ohio and West Virginia residents who allege that they developed thyroid disease, high cholesterol and other health disorders due to drinking C8 contaminated water released by the DuPont Washington Works Plant In Parkersburg, West Virginia. According to the C8 complaints, the plaintiffs were exposed to the C8 chemical because they either worked or lived in at least one of the six water districts affected by C8 contaminated water. The C8 lawsuit claims allege that the plaintiffs suffered severe and permanent personal injuries as a result of the Washington Works Plant’s discharge of the C8 chemical. The C8 lawsuits contend that DuPont was negligent in not disclosing that its plant was discharging the C8 chemical, and the plaintiffs would not have drank the water had they known it was contaminated. The C8 lawsuits were filed in the U.S. District Court, Southern District of Ohio where C8 lawsuits have been centralized for pretrial proceedings. (In Re: E.I. DuPont De Nemours and Company C-8 Personal Injury Litigation, MDL No. 2433)

Wright & Schulte LLC is already representing clients in the C8 multidistrict litigation pending in the U.S. District Court, Southern District of Ohio. Attorney Richard W. Schulte, a founding partner with Wright & Schulte LLC, is on the Plaintiffs’ Steering Committee for the federal C8 litigation. Mr. Schulte was appointed to the Committee by U.S. District Judge Edmund A. Sargus, Jr., who is presiding over the C8 litigation along with District Court Magistrate Judge Elizabeth Preston Deavers. Wright & Schulte LLC continues to offer free C8 lawsuit consultations to individuals who developed a disease after being exposed to C8 contaminated drinking water. For more information on filing a C8 lawsuit or to schedule a free legal consultation with a C8 attorney from Wright & Schulte LLC, please visit yourlegalhelp.com.

Court documents indicate that a class-action lawsuit was filed against DuPont in 2001 on behalf of nearly 70,00 Mid-Ohio Valley residents who lived or worked near DuPont’s Washington Works Plant in Parkersburg West Virginia. (Leach v. E.I. Du Pont De Nemours & Co., No. 01-C-608 (W. Va. Cir. Ct.)) The class-action complaint was settled in 2005. As part of the settlement, a C8 Health Project was created to gather health information from class action members. The project, which began in July 2005, involved residents taking a series of blood tests, including one to determine the amount of C8 in their bloodstream. Settlement terms also called for creating a C8 Science Panel that would determine whether there were probable links between C8 exposure and diseases in the community. According to the panel’s report, C8 is the name given to perfluorooctanoic acid, a man-made chemical used in manufacturing such products as non-stick cookware, and protective finishes on carpets and water-resistant clothing.
[c8sciencepanel.org/c8health.html]
[c8sciencepanel.org/panel.html]

In October 2012, the C8 Science Panel reported that there is a probable link between C8 exposure and the following diseases and conditions:

As a result of the panel’s discovery, individuals who lived or worked in one of the six affected water districts in Ohio and West Virginia prior to December 4, 2004, were eligible to file a C8 personal injury and wrongful death lawsuit if they suffered from a disease or condition which the C8 panel linked to C8 exposure. The six water districts affected by C8 contaminated water are:

Court documents indicate that pretrial proceedings in the C8 multidistrict litigation are underway in the Southern Ohio District Court. In September, Judge Sargus and Magistrate Judge Deavers announced in a pretrial order that two C8 cases have been selected for bellwether trials scheduled on September 14, 2015 and November 30, 2015. Bellwether trials were also scheduled for March 2016, late April 2016, August 2016 and October 2016. Bellwether trials are representative of all lawsuits filed in the litigation that have the same common issues. The outcome of bellwether trials helps plaintiffs and defendants to predict trends for other similar lawsuits that will be tried in the future. (In Re: E.I. DuPont De Nemours and Company C-8 Personal Injury Litigation, MDL No. 2433)

About Wright & Schulte LLC
Wright & Schulte LLC, an experienced personal injury firm, is dedicated to the belief that America’s legal system should work for the people. Every day, the attorneys of Wright Schulte LLC stand up for the rights of people who have been injured or wronged, and fight tirelessly to ensure that even the world’s most powerful corporations take responsibility for their actions. If you’re looking for a law firm that will guarantee the aggressive and personal representation you deserve, please do not hesitate to contact Wright & Schulte LLC today. Free DuPont C8 lawsuit case evaluations are available through yourlegalhelp.com, or call 1-888-399-0795.