Xarelto Lawsuit News: Woman Seeks $10 Million in Damages For Alleged Bleeding Side-Effect Due To Xarelto Use

The Xarelto Lawsuit Complaint Alleges That Janssen Pharmaceuticals And Bayer HealthCare Did Not Disclose The Bleeding Risks Associated With The Prescription Blood Thinner Medication. 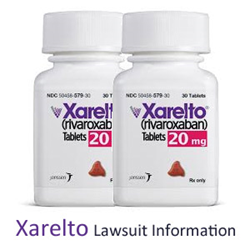 If you believe you have suffered internal bleeding due to Xarelto contact the attorneys at Wright & Schulte LLC For a Free legal consult buy calling 1-800-399-0795 or visit www.yourlegalhelp.com or call

A Xarelto lawsuit has been filed on behalf of a 72-year-old New York woman who is seeking $10 million in damages from the makers and marketers of the Xarelto prescription blood thinner. According to the lawsuit, the woman began using Xarelto in March 2012 and used it through July 2012. The woman alleges in her lawsuit she suffered life-threatening bleeding in July 2012 and as a result, sustained severe and permanent personal injuries, pain, suffering and emotional distress. The lawsuit purports that the woman’s injuries are due to the fact that the defendants, Janssen Pharmaceuticals, a subsidiary of Johnson & Johnson, and Bayer HealthCare, knew or should have known that unreasonably dangerous side-effects were associated with Xarelto yet they continued to manufacture, distribute and market the blood thinner. According to the lawsuit, the woman wants to be compensated because she will need lifelong medical treatment, monitoring and medication as a result of using Xarelto. The lawsuit was filed in the U.S. District Court, Eastern District of New York. (1:14-cv-05133-FB-RM)

As Xarelto lawsuit filings continue across the country, court documents indicate that plaintiffs involved in six Xarelto lawsuits have asked the U.S. Judicial Panel on Multidistrict Litigation (JPML) to transfer all federally filed Xarelto lawsuits and consolidate them in the U.S. District Court, Southern District of Illinois. The JPML has scheduled oral arguments on the matter for December 4, 2014, at the U.S. District Court, District of South Carolina in Charleston. The plaintiffs’ motion states that the Xarelto bleeding side-effects complaints all have common allegations of patients who were prescribed the blood thinner medication experienced uncontrolled bleeding which in some instances, resulted in their death. The Xarelto complaints also contend that the defendants failed to warn patients and their doctors that there is no antidote for Xarelto should serious bleeding occur and there is a chance for the patient to suffer life-threatening effects as a result. In its response to the plaintiffs’ motion to consolidate Xarelto lawsuits, Janssen asked the JPML not to establish multidistrict litigation for only an estimated 30 lawsuits, the number of Xarelto complaints filed as of October 31, 2014, but to allow an informal coordination of the cases between attorneys for plaintiffs and defendants. (In Re: Xarelto Products Liability Litigation, MDL No. 2592, JPML)
[fda.gov/NewsEvents/Newsroom/PressAnnouncements/ucm326654.htm, November 2, 2012]

Xarelto (generically known as rivaroxaban) is an oral anticoagulant that was approved by the U.S. Food and Drug Administration (FDA) to treat deep vein thrombosis and pulmonary embolism. Xarelto along with Pradaxa (dabigatran), and Eliquis (apixaban) are three new FDA-approved blood thinners that have joined warfarin (Coumadin, Jantoven), a blood thinner that has been on the U.S. market for 60 years. According to the FDA, warfarin uses vitamin K to reverse the effects of warfarin should serious bleeding occur in a patient. Unlike warfarin, there are no reversal agents for the new blood thinners should significant bleeding occur, the federal agency says.
[fda.gov/Drugs/NewsEvents/ucm405148.htm, July 17, 2014]

The Xarelto blood thinner was first approved by the FDA in July 2011 to reduce the risk of blood clots in patients who had knee or hip replacement surgery. In November 2011, the FDA approved Xarelto to reduce the risk of stroke and blood clots in patients with atrial fibrillation (irregular heart rhythms). In June 2013, the FDA issued a warning letter to Johnson & Johnson regarding a print advertisement for Xarelto, that was submitted on behalf of Janssen Pharmaceuticals, Inc. The FDA called the print ad “false or misleading” because it minimized the risks associated with Xarelto. Additionally, the FDA letter noted that the ad made a misleading claim by saying that there are no dosage adjustments for Xarelto when in fact, the product label for Xarelto mentioned that patients with renal impairment may need to have their dosage adjusted while using Xarelto. The FDA letter also mentioned that the most common adverse reactions with Xarelto were bleeding complications.
[fda.gov/downloads/Drugs/GuidanceComplianceRegulatoryInformation
/EnforcementActivitiesbyFDA/WarningLettersandNoticeofViolationLetters
toPharmaceuticalCompanies/UCM357833.pdf, June 6, 2013]

About Wright & Schulte LLC
Wright & Schulte LLC, an experienced personal injury firm, is dedicated to the belief that America’s legal system should work for the people. Every day, the attorneys of Wright & Schulte LLC stand up for the rights of people who have been injured or wronged and fight tirelessly to ensure that even the world’s most powerful corporations take responsibility for their actions. If you’re looking for a law firm that will guarantee the aggressive and personal representation you deserve, please do not hesitate to contact Wright & Schulte LLC today for a FREE Xarelto bleeding lawsuit evalution through yourlegalhelp.com or by calling 1-800-399-0795.