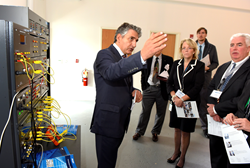 Dr. Nader Imani, CEO of Festo Didactic (l) provides a tour of the showroom at the newly-opened Center fort Workforce Technology Education in Eatontown. At center is Jo Schloder, policy advisor to Rep.

Addressing the fact that 2 million manufacturing jobs in the U.S. go unfilled because there are not enough trained individuals, Festo Didactic opened the doors today on a high-tech learning laboratory that will provide the instruction that modern-day manufacturers need to compete and succeed.

Festo Didactic, part of the Festo AG company of 17,600 employees across the globe, is considered a “job multiplier” for New Jersey and beyond. Festo Didactic empowers its customers to train their employees into becoming qualified for highly sophisticated manufacturing work across the U.S.

“Most American production processes have adopted advanced manufacturing techniques that require fewer workers on the shop floor,” said Nader Imani, CEO, Festo Didactic. “But there is a tremendous and growing demand for more workers with technical training that can operate and repair sophisticated equipment and plan production.

“The new era of manufacturing focuses in a high-speed, high-tech world, fueled by technology, in which highly-skilled workers are needed to operate automated manufacturing and processing equipment,” he added.

During today’s event, hundreds of people attended the unveiling of the learning laboratory, which featured the latest training tools across the modern manufacturing sector. Attendees also attended seminars, with experts discussing the latest trends and issues in advanced technologies in the United States, as well as visited a Festo trade show.

Festo Didactic moved to Central Jersey in June, acquiring Lab-Volt Group of Companies, which had been headquartered in Farmingdale, NJ. With this move, Festo Didactic is now able to offer an even broader range of products and services beyond the 3,500 courses it offers annually in more than 26 languages across the globe.

Daniel Boese, general manager of Festo Didactic SE, explained that high schools in Germany provide students with technical training based on the needs of the local manufacturers. The companies, in turn, provide three-year apprenticeships to train the students, a practice that has all but disappeared in American industry.

“Often, those who become chief executive officers in German manufacturing companies have come through the apprenticeship program, where a hands-on emphasis of the manufacturing process gives them a full understanding of all the facets of the production techniques and challenges of the facilities under their watch,” Boese explained. “We know the key to innovation is through industrial training.”

Tim Lizura, President & Chief Operating Officer of the New Jersey Economic Development Authority, said the state is pleased to welcome Festo, a global engineering and manufacturing company, and is supporting the new operation with an award through the Grow NJ Program.

While Festo Didactic focuses on training, the larger company is known for the development of higher-performing, more-profitable manufacturing equipment. Festo has 300,000 customers of factory and process automation in more than 200 industries and 176 countries around the world.

“We are thrilled that Festo’s decision to expand in New Jersey represents the creation and retention of jobs, the investment of millions of dollars in the State’s economy, and the commitment of such an innovative and dynamic company,” Lizura said.

Kai Hennig, Deputy Consul General, German Consulate General in New York, said Festo is one of the world leaders in the production of sophisticated automation equipment for manufacturers such as Volkswagen or Siemens, as well as for training and education.

“Festo provides any resource which is needed to guarantee the overdue evolvement of the typical US apprenticeship,” Hennig said. “It bridges the disconnect between available manufacturing jobs and appropriate training.”

Imani expressed his appreciation to the teams at Lab-Volt and Festo Didactic, whose hard work and commitment has made this project happen. “There is tremendous pride in all that you will see and experience inside the walls,” he said. “I thank our team members who made it happen, and now have a bright future as part of the Festo family.”