Bill Bunn's second YA novel, "Kill Shot," takes place in a village in Labrador, where a teen boy finds a partially submerged German U-boat from over seventy years ago. The book is scheduled for publication from Bitingduck Press on April 6, 2015, and is currently available for pre-release review. 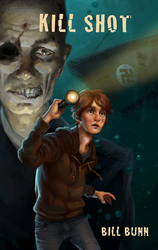 More than a dozen WWII-era German U-boats remain unaccounted for, the fate of their crews unknown. In summer 2012, sonar scanning found a submerged vessel of the right dimensions in Canadian province of Labrador. Fascinated by how a submarine could find itself a hundred kilometers from the nearest ocean, YA author Bill Bunn flew from his home province of Alberta to spend a week in the remote village of Goose Bay, Labrador, near where the boat was detected.

From his trip grew a fast-paced teen adventure, Kill Shot. Fully fictional, the story switches between the events of the war that led the German crew to submerge and eventually die in the river, and the adventures that occur seventy years later when a teen boy finds the remains of the vessel and crew. He isn’t the only one to be interested, since the boat contained a precious artifact that had remained undelivered all those long years.

Bunn brings adolescent awkwardness to life with a motley crew of friends and foes. The boat’s finder, Wednesday Smythe, is a pimply 14-year-old high school freshman whose parents died when he was too young to remember them. Shuttling between foster care and a group home, he finds himself in a rural trailer with a hair-cutting entrepreneur for a stepmother and an unemployed stepfather who pawns the foster kids’ things to pay the bills. Without phone, game console, or tablet, Wednesday is forced into long walks along the river, where his discovery takes place.

His only friend in this remote location, a girl called "Stump," has been raised by her reclusive father with almost no social contact. She can’t use a phone, but she can wield a chainsaw. Wednesday’s other friend, Wally, is embittered and angry in foster care, lashing out in ways that threaten Wednesday’s growing rapport with his new family. All three are drawn together in a fast-paced adventure pitting their wits against the bad guys, and the cops who want to bust them for any number of nefarious deeds.

A professor of English at Mount Royal University, Bunn is the author of three previous books: the teen magical adventure “Duck Boy” (Bitingduck Press, 2012); “Hymns of Home,” a collection of essays on family, technology, and the environment that reached Calgary's bestseller list twice in Summer 2013 (Bitingduck Press, 2013); and an illustrated children’s book, “Canoë Lune” (Le Canotier, 2001). He has a writer's blog sharing his writing secrets, and is active in the Young Alberta Book Society.

“Kill Shot” will appear in print and electronic format on April 6, 2015. It is currently available for pre-release review at NetGalley or by direct request from Bitingduck Press. Founded in March 2012 by two physicists, Bitingduck is an independent publisher that brings the quirky, ego-driven, and sometimes corrupt world of science to its readers. Publishing 6-8 titles per year, the press will feature adult and teen hard science fiction in 2015. Manuscripts are being accepted for 2016 and later.