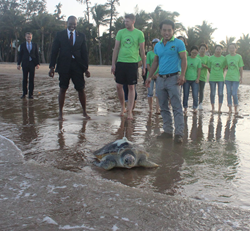 Turtle with Satellite Released by U.S. Officials and Sea Turtles 911

With the recent landmark climate change agreement between U.S. President Barack Obama and Chinese President Xi Jinping, both countries are ramping up efforts to curb global warming, which can only be good news for endangered sea turtle species.

"Since climate change affects marine turtles throughout their life cycle, working together to save sea turtles dovetails nicely with the climate change agreement by the U.S. and China," said Frederick Yeh, Founder of Sea Turtles 911 and the International Union for Conservation of Nature's (IUCN) Marine Turtle Specialist. Three months ago, a China/USA Sea Turtle Workshop was convened in Hawaii under the auspices of the Bilateral Living Marine Resources (LMR) initiative of National Marine Fisheries Service (NMFS) Headquarters and the Chinese Academy of Fishery Science in Beijing. A published report from the meeting concludes that, "Cross-cultural goodwill and cooperation were advanced between China and the USA, using sea turtle science and ecology as the means of person-to-person diplomacy."

Raised for the past seven years at an aquaculture facility that rears sea turtles for research purposes, Goget is returning to the ocean outfitted with a satellite transmitter tag from Hong Kong's Ocean Park Conservation Foundation. The satellite will track her migratory movements in China's waters, shedding light on the adaptability of captive-reared marine turtles to the wild, and providing geographic data on potential feeding and nesting sites.

The released sea turtle is named in honor of the former Ritz Carlton Sanya General Manager Michel Goget, who spearheaded the resort's five year partnership with Sea Turtles 911 in China. Mr. Goget, who is passionate about the ocean, has now retired and is returning to the U.S. by cruise ship, hoping to catch a glimpse of his namesake turtle in her natural environment. As Mr. Goget remarked, "It would be a dream to see my honorary turtle safely in the ocean and to achieve this, we must continue to work on sea turtle conservation issues globally."

As the global climate warms, sea levels rise on beaches, eliminating viable nesting habitats for sea turtles. Since gender determination in sea turtles occurs during the egg stage and depends on the incubation temperature, higher temperatures may also dangerously skew the sex ratios of future sea turtle generations. Furthermore, illegal wildlife trade, fisheries bycatch, and pollution are driving sea turtles to the brink of extinction in China. Sea Turtles 911, the first and only non-profit organization working for marine turtle conservation in China has been actively involved in mitigating these anthropogenic threats through public awareness, education, and the rescue and release of sea turtles such as Goget.

Satellite-tagged Sea Turtle Heads HomeOfficials and Volunteers carry Goget, the sea turtle with a satellite tracking device mounted on her shell, back to her ocean home.