During the cold weather Nargis Cafe serves charcoal-grilled meats and fish. Charcoal-grilled fish also comes in for its share of praise, including the “crackling and succulent” trout as well as sea bass, salmon, bronzini and the catch of the day. 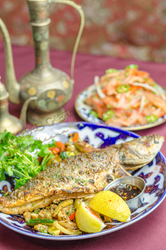 As the perfect complement to its tasty charcoal-grilled meats and fish, Nargis Cafe has recently introduced a lineup of several European (or European-style) draft beers

During the cold weather Nargis Cafe serves expended charcoal-grilled meats that include lamb, lamb ribs, beef, veal liver, lamb chops, chicken wings and chicken hearts. The winter menu also features charcoal-grilled fish that comes in for its share of praise, including the “crackling and succulent” trout as well as sea bass, salmon and bronzini!

Brooklyn's Famous Nargis Cafe, the central Asian hotspot that Village Voice restaurant critic Robert Sietsema has named as one of his favorite Brooklyn eateries, is actually one of the few area restaurants that grill meat and fish directly over real charcoal. Sietsema singles out the smoky sea bass kebabs topped with grilled onions as one of the “must-try” dishes, and he also highly recommends the lamb rib kebabs, with their strong wood-smoked taste, the flavorful onion-laced ground lamb lulya kebab, the yogurt-tenderized grilled chicken kebab and the crispy-skinned marinated Cornish hen. Many of these charcoal-grilled entries are served with a side dish of rice or vegetables.

Nargis Cafe also features appetizers and entrees with an international flair. Cold appetizers include Russian-style pickled herring and a cumin-spiced shredded carrot salad, as well as a Korean-influenced spicy cabbage kim-chee. The Village Voice called the Tashkent salad, made with boiled beef, eggs, shredded radish and scallions “unexpectedly delicious”, while Chef Big B suggests the middle eastern-influenced Bojon salad made from garlicky roasted eggplant. The middle eastern influence also makes itself felt with the inclusion of baba ghanoush and hummus as appetizers, while another Chef Big B recommendation, the meat-stuffed samsa pastries, are similar to what you might find in an Indian restaurant. Manti, meat-stuffed dumplings, are kind of like Chinese pot stickers, although quite a bit larger – the Village Voice calls them “fist-sized”, and Big B claims that this dish alone has made repeat customers out of many first timers.

In the meantime, food lovers near Brooklyn can come to the corner of Coney Island Avenue and Avenue Z for a taste of Central Asian food and culture. With the weather getting colder, patrons of the Nargis will feel warmer after enjoying one of the hearty and delicious cultural soups on the menu.

Speaking of culture, the management of Nargis Cafe pays the same attention to detail in the decor as the food. Everything in the restaurant is beautiful, from the food, to the plates and bowls in which the food is served, to the colorful decorations that fill the dining room from floor to ceiling. Eating at Nargis Cafe is an immersive experience in food and culture.

It's reasons like that which lead the FX television network to choose Nargis Cafe as a location shoot for an episode of its Cold War-era thriller series "The Americans." The producers of the TV show saw authenticity in the Nargis Cafe look, and determined the setting would fit the theme of the show.

Nargis Cafe is a Brooklyn-area restaurant specializing in authentic Uzbek and central-Asian cuisine. Nargis Cafe was founded in 2007 at the corner of Coney Island Avenue and Avenue Z by chef Big B, an Uzbekistan-born and American-trained chef. As noted in an article about the restaurant in "The New York Times," the word "Nargis" means beautiful flower also called Narcissus poeticus.