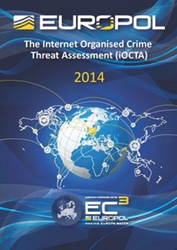 Not only will the 'Crime as a Service' business model give rise to more internet crime, it could also lead to a race to the bottom, with developers providing ever cheaper and easier to use tools and services."

At Scientific American this week, futurist Richard Yonck explores recent developments in online crime, including potential murders over the internet in the not-too-distant future. Yonck cites a recent Europol report on cybercrime, forecasting that the world’s first “online murder” could occur by the end of 2014.

The online murder forecast was part of a 2014 Internet Organized Crime Threat Assessment report by Europol’s European Cybercrime Centre. A foresight analyst with Intelligent Future Consulting, Yonck discusses the methods that could be used to commit such a crime and who might be its potential victims. He also offers some possible solutions for the challenges new technologies create.

Online murder is just one of many threats individuals and organizations face in the rapidly shifting world of cybercrime. According to the Center for Strategic and International Studies, a bi-partisan think tank based in Washington, D.C., cybercrime now carries a $445 billion annual global price tag.

“The underground economy has been developing a ‘Crime-as-a-Service’ (CaaS) business model, similar to the legitimate ‘software as a service’ delivery model,” Yonck explains. “This allows black hat hackers and other skilled criminal specialists to provide a wide range of products and services. These cover many different forms of criminal activity and are allowing those with few technical resources to readily enter into the world of cybercrime. Unfortunately for most of us, this wasn’t a bar that needed to be lowered.”

In light of these developments, Yonck states that without changes to our security and legal systems, cybercrime will inevitably proliferate. “Not only will this likely give rise to still more cybercriminal activity, it could also lead to a race to the bottom, with CaaS developers providing ever cheaper and easier to use tools and services."

The threat of cybercrime continues to grow, as evidenced by recent breaches at JPMorgan Chase and Target. Given the continuing increase of this activity and the rapidly growing cost to the economy, it’s obvious much more needs to be done to fight cybercrime and safeguard the interests of businesses and consumers everywhere.