Lisa Edelstein is the latest celebrity to join Best Friends Animal Society in bringing awareness to the sad fact that each day 9,000 cats and dogs die in our nation's shelters. 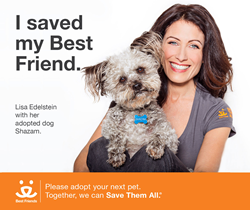 When you rescue your pet, there's an undeniable bond and their extraordinary gift of gratitude is one of unconditional love. Far too many beautiful and loving animals are dying in shelters, simply because they don't have homes.

Lisa Edelstein urges Americans to get the “extraordinary gift of gratitude” that comes from adopting a rescued pet as she joins national animal welfare organization Best Friends Animal Society’s campaign to end the killing of dogs and cats in our nation’s shelters.

Edelstein is perhaps best known for captivating audiences in the role of Dr. Lisa Cuddy who went toe to toe with the cantankerous Dr. House (Hugh Laurie) on the popular Fox series, ‘House M.D.’ Her new series ‘Girlfriends’ Guide to Divorce’ made its debut on Bravo on Dec. 2. From roles on series like “The Good Wife” and “Castle” and in movies such as “Keeping the Faith,” Edelstein is a perennial fan favorite.

“All of my pets are rescues,” Edelstein said. “When you rescue your pet, there's an undeniable bond and their extraordinary gift of gratitude is one of unconditional love. Far too many beautiful and loving animals are dying in shelters, simply because they don't have homes. I encourage anyone thinking of buying a pet to instead please visit their local animal shelter or rescue organization. When you adopt, you're doing your part to Save Them All.”

Lisa Edelstein 'I Saved"photo ad for Save Them All